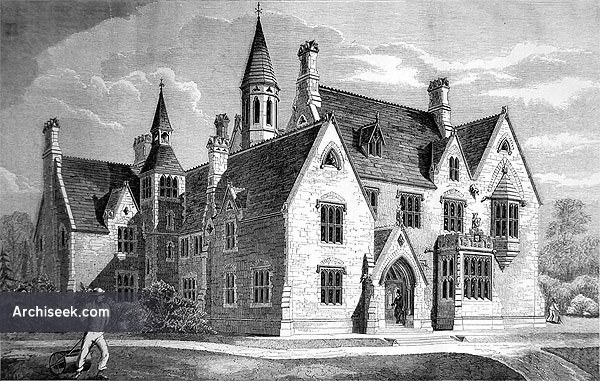 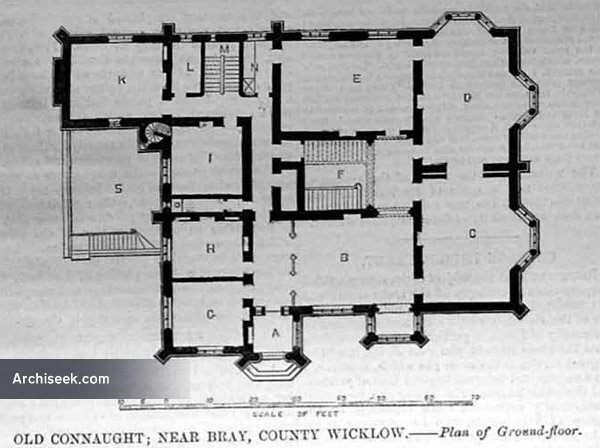 A fine Tudor mansion by Charles Lanyon of Lanyon an Lynn, in the late 1850s, and completed by 1860. Published in The Builder, March 5 1859. “This mansion is being erected for R. Riall, esq. in the demesne of Old Connaught-hill, near Bray. The site is most picturesque, commanding beautiful views of the bay of Dublin, and the mountains of Wicklow. The materials used for the facing of the whole of the exterior consist of Wicklow granite, with Portland stone for the dressings of the doors and windows. The architects are Messrs. Lanyon and Lynn of Belfast; and the builders, Messrs. Cockburn and Sons, of Dublin.” 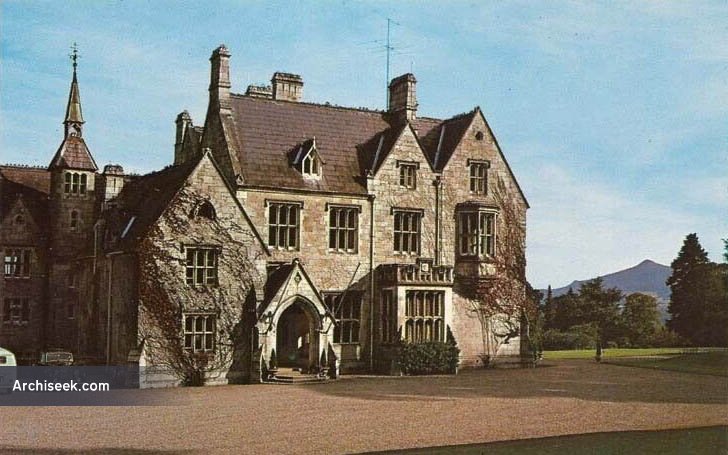 Today Old Connaught House or Old Conna, as it is usually referenced, is home to a private preparatory school, after a period as a hotel in the 1950s.

“WE notice that in this locality a mansion of considerable architectural beauty and importance is now nearly completed for Phineas Ryall, Esq., from designs by Messrs. Lanyon and Lynn, architects, Belfast. Considering the general character of our recently erected suburban domestic dwellings, a view of this recalls to our minds “the good old times,” when Irish gentlemen built palaces and made them their homes, and when architectural skill was called into requisition beyond mere stereotyped brick and mortar forms. The professional gentle men engaged here have availed themselves largely of the opportunity afforded,and produced a design which in picturesqueness of effect, pleasing variety of light and shade, gracefulness of contour, and all the other requisites for a good architectural work, fairly entitle it to rank with the most successful productions of a Morrison, a Gandon, or a Johnston. The mansion occupies an area of about 88 feet by 64 feet, and is of early English character, built externally of irregular granite rubble, with Portland stone dressings, string and barge courses, water tables, &c. The principal front presents an irregular elevation, broken by a wide projecting gable, beyond whose face the entrance porch still further advances, by a handsome bay window, with ornamental parapet; by gablets, oriel windows, and two towers, one of octagonal form—situated internally, communicating with principal staircase, and terminated by a deeply weathered conical top, rising to a height of 80 feet—and another of square form, and 50 feet high, externally placed, and forming a junction between the main and minor buildings. The windows throughout are generally many light bays, with mullions and transom heads, and are finished with label mouldings, dressings, &c. Internally the house comprises all the apartments requisite for a building of its class, including grand hall, morning, drawing, dining, and ante-rooms, own and house keeper’s apartments on principal story; comprehensive culinary offices, servants rooms, storeys, &c., in the basement; and bed-rooms of various sizes, bath and dressing-rooms, &c., &c., in the first floor.

The principal hall is a very handsome apartment, 28 feet by 20 feet, with an ornamental frieze course, and open panelled and decorated timber ceiling, stained and varnished; and a highly enriched move able screen work carried up, as also is the wainscotting all round to a height of 9 feet. The works throughout reflect great credit on the builders, Messrs. Cockburn and Son.” The Irish Builder, August 1 1859.