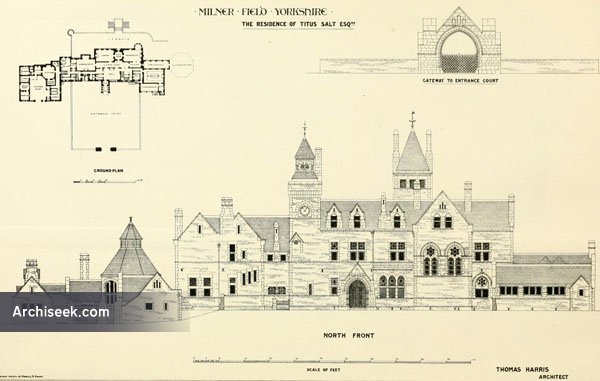 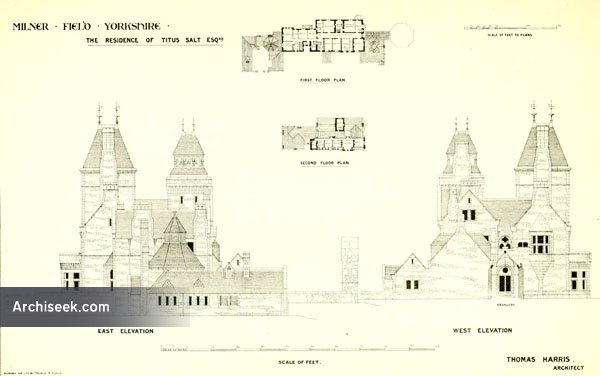 Milner Field was a large mansion set within its own parkland, one mile to the north west of the mill and model village of Saltaire. It was commissioned by Titus Salt Jnr, the youngest son of the famous Victorian wool baron and philanthropist Sir Titus Salt, and built in 1869 to the plans of Thomas Harris. After the death of Salt Jnr (in the house), the house passed through other owners and residences, and gained a reputation for being “unlucky”. There were several unusual deaths among the owners families making it difficult to lease or sell. Described by author Bill Bryson in “Notes from Small Island” as “Before long the house developed a reputation as a place where you could reliably expect to come a cropper. People moved in and abruptly moved out again, with ashen faces and terrible wounds.” Eventually demolished, only some mosaic tiles from the conservatory, and the cellars can be discerned amongst piles of brick and stonework. 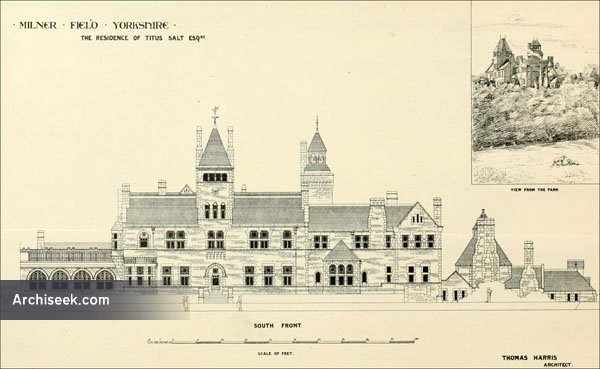 From The Building News, December 25 1874: “This” house, which stands in a prominent and commanding position, overlooking the valley of the Aire, between Saltaire and Bingley, was commenced in 1869 as a residence for Mr. Titus Salt, of Saltaire. Two years were occupied in its erection, the interior being temporarily fitted up for occupation; the decoration is now being carried out gradually in high-class art. The style adopted is Twelfth Century Medieval, Which has been strictly adhered to, as far as consistent with modern requirements. The general contractors were Messrs. Shaftoe and Barry, of York. The ornamental metalwork was executed by Messrs. Richardson, Slade and Co., of Browlow-street, London ; the furniture and dadoes by Messrs. Marsh, Jones and Cribb, of Leeds ; the stained glass by Messrs. Saunders and Co, of Endell-street, London ; the cartoons being drawn by Mr. Weekes, who also painted the chimney-piece and dado panels. The carving and wall decorations have yet to be done. The architect is Mr. Thomas Harris, of Gray’s-inn Chambers, High Holborn, London. Our illustrations of this house consist of three sheets, which includes north, south, and end elevations, and plans.”