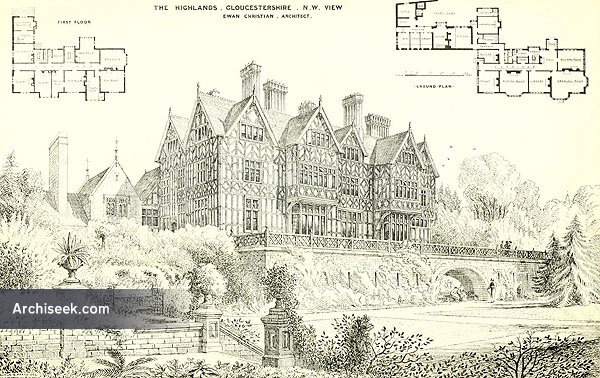 Constructed between 1871-73 for Caroline Frith, the widow of a wealthy London banker. An early example of the influence of Richard Norman Shaw’s work on an older architect, although Christian claimed otherwise. He suggested that the use of half-timerbering was because it was difficult to get masonry foundations to hold firm, as a previous house had collapsed in a landslip. The interior largely survives today, as the building is now in use as Beaudesert Park School. Founded in 1908 at Henley in Arden, Warwickshire, the school moved to Highlands in 1918.

Published in The Building News, October 9 1874: “This house, though built in a stone district, was, after much consideration, constructed with timber framing, owing to the impracticability of obtaining a reliable foundation for walls of masonry. The external framework is of English oak timber, so put together that in case of any slip in the ground below, the body of the house shall stand firm, and simply require packing from beneath. The space between the timbers is filled in with Dennett’s concrete, with oak laths and cement facing in front, the whole boarded inside, and afterwards felted, battened, and plastered. The floors are constructed with fir beams, over which is laid Dennett’s concrete, and upon that the usual boarding. On the ground-floor the ceilings between the beams are panelled and ribbed with deal, and varnished. In the upper stories the ceilings are formed between the beams on the lower surface of the concrete. The whole structure is simple in character, but very substantial, and stands on a site of remarkable beauty, about 11OOft. above the sea-level. The slope from the house is so rapid as to require a succession of terraces for flower-gardens The first terrace is constructed of masonry on the site of the old house, which failed for the reason first stated, the space beneath the garden being utilised for a series of rain-water tanks and other purposes. There are two terraces below, each the earthwork, laid out with flower-beds. Tho work has been well carried out by Mr. Aftcourt, of Gloucester, builder, under the direction of Mr. Ewan Christian as architect.”