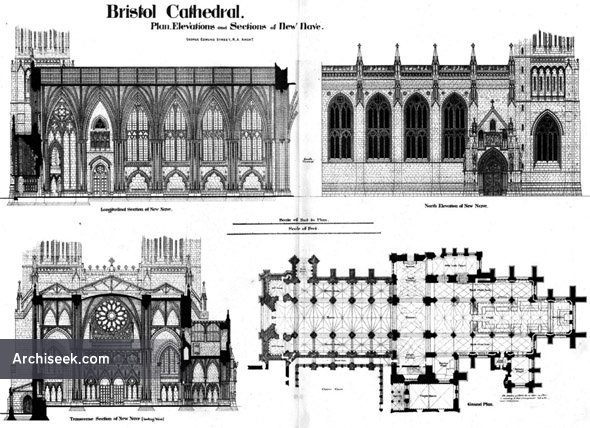 Elevations, Tranverse Section of New Nave & Plan published in The Building News, October 20th 1876. The Cathedral Church of the Holy and Undivided Trinity is the Church of England cathedral in the city of Bristol, England, and is commonly known as Bristol Cathedral. Founded in 1140, it became the seat of the bishop and cathedral of the new Diocese of Bristol in 1542. With the 19th century’s Gothic Revival signalling renewed interest in Britain’s ancient architectural heritage, a new nave, harmonious in style with the eastern end, was added between 1868 and 1877 by George Edmund Street. The opening ceremony was on 23 October 1877. However the west front with its twin towers, designed by John Loughborough Pearson, was only completed in 1888.