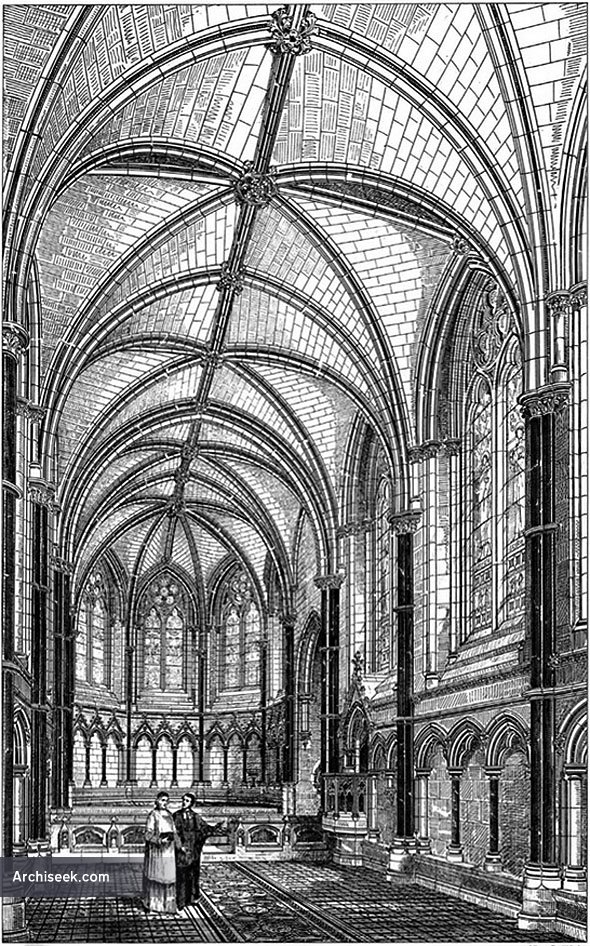 Published in The Building News, October 18th 1878. “This chapel is attached to the residence of the late William Gibbs, Esq., the munificent founder of the chapel of Keble College, Oxford, which was being erected at the same time as the subject of the present illustration. Owing to the position of the house and the nature of the ground it was found impossible so to place the chapel that it might be entered from the ground floor. It is, therefore, built on the side of rapidly rising ground at the back of the mansion, the chapel floor being slightly higher than the first floor of the house, with which it is connected by a covered bridge or corridor ; thus without any great internal height the chapel becomes externally the principal feature of the house. It is built of the local redstone, hammer-dressed with bands of Ham-hill stone and dressings of Box Ground. Internally the whole is of Corsham Down stone. The detached shafts and the steps are of Devonshire marble.

The pavement, by Messrs. Powell and Sons, of Whitefriars, is a mosaic composed partly of marble and Mexican onyx, and partly of a vitreous material made by them, in which colours can be obtained, which are not found in any marbles. The whole of the windows are filled with stained glass, also by Messrs. Powell. The screen wall shown in the view is surmounted by a low wrought-iron grille, and gates executed by Lever, of Maidenhead, who also made the gas corona and the eagle lee tern in brass. The ironwork of the doors is by Messrs. Hart, Son, and Peard. Since the drawing was made from which the illustration is taken, the chapel has been completed by filling the panels of the arcading in the apse with mosaics, executed by Salviati and Co., from cartoons prepared under the architect’s direction by Messrs. Heaton, Butler, and Bayne, who have also decorated the ceiling in a simple manner, the colours employed being confined to gold, grey, and white. The contractor employed was Mr. Booth. The carving was executed by Mr. Forsyth. The chapel is seated with specially designed prie-dieu chairs made by Mr. Booth. There is an organ gallery at the west end over a small groined ante-chapel, in which is placed the organ by Messrs. Hill and Son.”