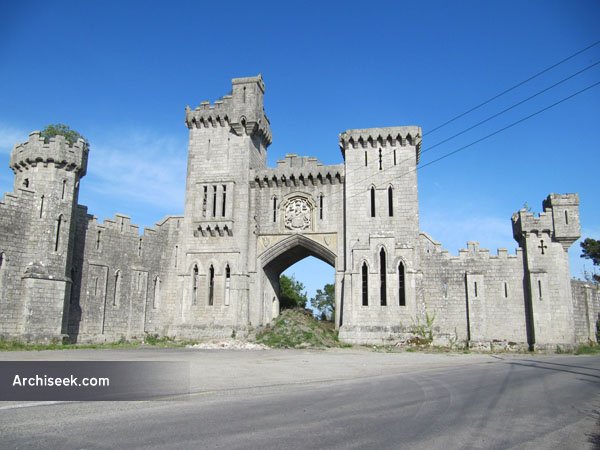 Fantastically muscular design for the main gateway to Duckett’s Grove – with a total extant of 240feet including two gateways, and an array of towers. The architect was originally from Co. Sligo but moved to England where he was one of the original promoters of the Oxford Architectural Society. He had a busy office working on ecclesiastical projects. During the 1850s that Derick was active in Ireland, where he is known to have designed three churches and the castellated gateway at Duckett’s Grove, co. Carlow. He exhibited work at the National Exhibition in Cork in 1852, and at the RHA in 1853. He died aged 49 in 1859.

The arms of the Duckett family are set over the central archway, where two iron gates were replaced by a doorway and infill when the building was converted into a public house in the 1960s. This has now been removed and the archway open again.

The main house at Duckett’s Grove was destroyed by fire in April 1933 and is now a pictureque ruin.