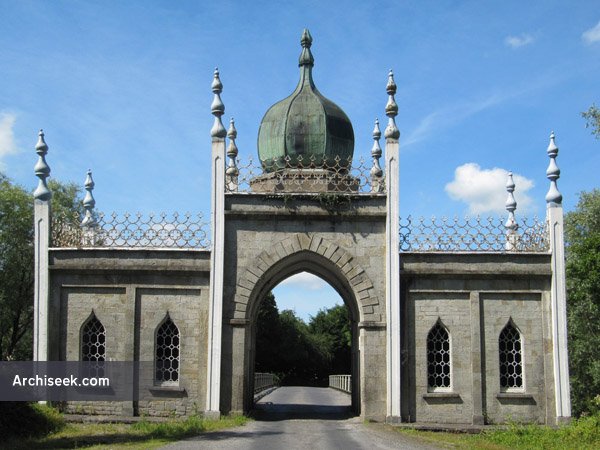 The “Hindu-gothic” Indian gate designed by a local architect Martin Day. The design is a strange combination of Gothic and Oriental styles and is the only Irish example of the Brighton Pavilion style of architecture. Originally built from wood and papier mache to greet the owner of the Dromana Estate, Henry Villiers-Stuart and his wife, Theresia Pauline Ott of Vienna, on returning from their honeymoon in 1826. The couple were so enchanted with the gate it was reconstructed in stone in later years. Day was active in the Waterford and Wexford areas from the 1820s onwards, and carried out work at Dromana, and Horetown House, as well as assisting Daniel Robertson at Castleboro and Johnstown Castle.

The gate structure was restored by the Irish Georgian Society in the 1960s and again by the Waterford County Council in 1990. It is approached via a short bridge and is the main entrance to Dromana House, which is open to the public.