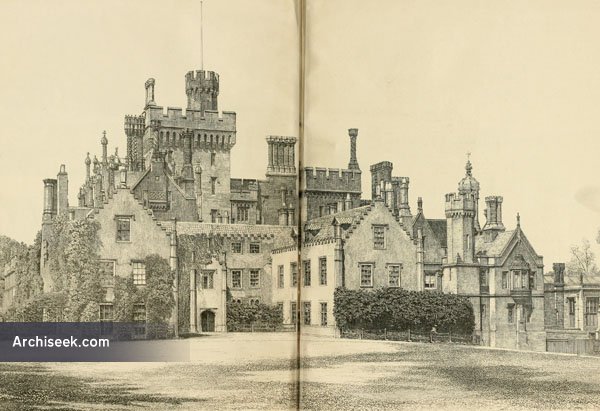 Between 1826 to 1836, J. C. Buckler built a Gothic castle for Lord Stafford which was several times larger than the original Tudor hall nearby, with many towers and mock-Tudor windows. The project was ongoing over several decades, continued by the 9th Baron Stafford from 1851, and although many features of the new design were realised, completion was ultimately prevented by dwindling funds. Only inhabited for a short time, by 1913, the contents of the house were sold, and the hall was left empty, until commandeered by the War Office during the First World War. In 1919, it was decided to demolish the hall.

From an issue of The Building News in 1867: “WE give this week, from a photograph by Mr. Mason, a double-page illustration of Costessey Hall, Norfolk, the seat of Lord Stafford. The architect is Mr. J.C. Buckler, of Oxford. Having applied to that gentleman for a description to accompany the illustration, we received the following reply : —

To the Editor of the Building News.

Sir, — If anything would induce me to pen a description of my own design, it would be the beautiful engraving of the east view of Costessey Hall, in which the old mansion figures so prominently. I am flattered and obliged by your attention in sending me a copy of the engraving, which exhibits the rich details of the new brickwork with marvellous delicacy around the now rugged surface of Queen Mary’s building.

I have neither time nor spirit to put pen to paper to oblige you, nor courage to describe in the most formal terms an edifice upon the production of which I have bestowed considerable labour, with a few intervals, ever since the year 1827, when the mansion was founded. — I am, &c.,