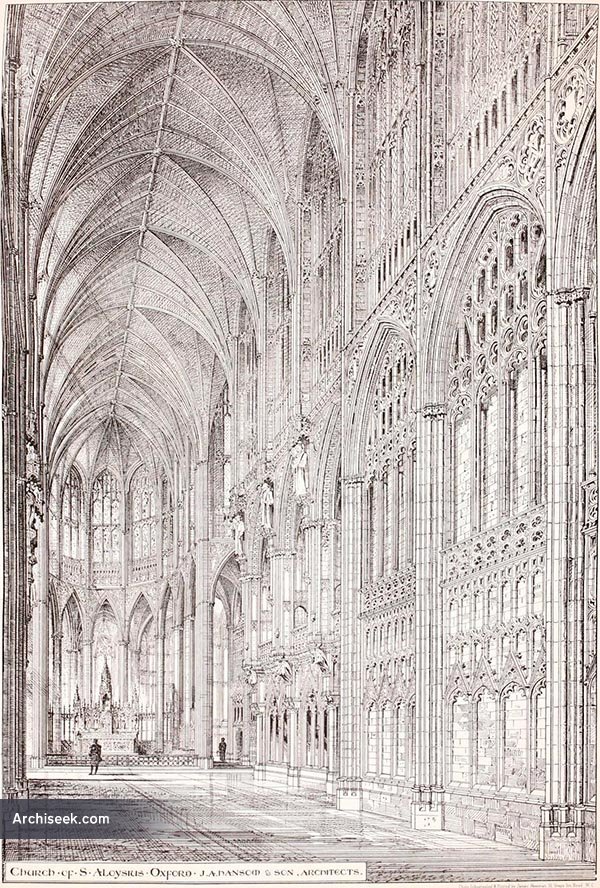 From The Building News: “In catering for our friends in this Christmas Number, we have obtained permission from Messrs. Hanson and Son to present the interior perspective of the design which they made some months ago for the new Catholic Church of S. Aloysius, Oxford ; for although we learn that an altered design has been decided on (which we may hope to give in a later number) yet there is so much good architecture in this, the original, that we should be sorry not to have it put fully on record, if only for the benefit of students. The most marked feature or peculiarity perhaps consists in a uniform width of vaulting being obtained, though the width of spaces covered over materially differ ; for instance, the general width of site was such as to give 27 feet only for the nave and sanctuary, but a middle portion was wider, and admitted of what was thought desirable, namely, to give greater accommodation, so that the corresponding portion of nave is 34 feet wide, and the supporting piers of the vaulting have in this part their abutting line, so to speak, in overhanging bracket, imago, and canopy thus keeping to the true maxim of ornamenting construction, and avoiding the false — of constructing ornament. Another feature contributing to the merit of the design, is the adoption of what may be termed gallery aisles, which though no novelty, as many fine examples of Mediaeval times attest, seems strangely neglected in this ago of economy as to making the most of the ground area, and concentrating the congregation. It is true the aisles are arranged as chapels in this design on both stories, but there is obviously no necessity for it, but only the outgrowth of that main element of beauty — fitness.”

St Aloysius’ Catholic Church was built in 1875 to serve the population of Oxford and the surrounding district. Designed, by J. Hansom, the architect of Arundel Cathedral, and the Holy Name church in Manchester. It is of French Gothic inspiration, and was originally colourfully decorated in an Italianate style. In 1954 the decoration was all painted over with two-tone grey. The last repainting in the 1970s gave the church the colours which can be seen today. The building is being gradually restored as part of the “Oxford Oratory – Reaffirmation & Renewal” campaign.

The church consists of a single nave and five side chapels. To the left of the sanctuary is the Sacred Heart chapel, and the Lady Chapel is to the right. There are also chapels dedicated to St Philip Neri (formerly St Joseph’s chapel) and Our Lady of Oxford (also known as the relic chapel). There are currently plans to build a new baptistery and a chapel dedicated to Cardinal Newman after his beatification in September 2010.