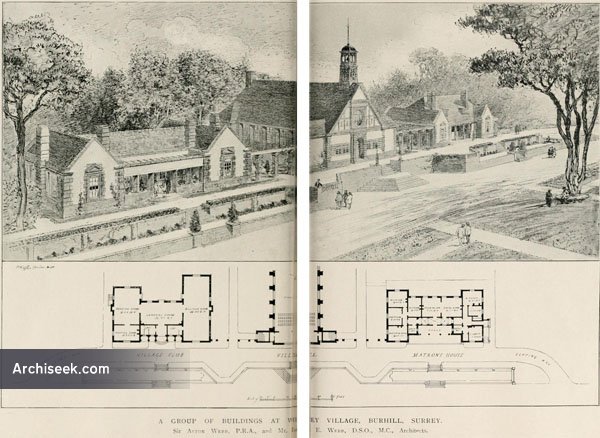 In 1907 the wealthy owner of a large Bayswater department store, William Whiteley, was shot dead by a young man claiming to be his illegitimate son. In his will he specified that the then considerable sum of £1,000,000 be used to purchase freehold land ‘… as a site for the erection thereon of buildings to be used and occupied as homes for aged poor persons’. Four years later the £40,000 purchase of the 225-acre Burhill Estate, between Weybridge, Walton-on-Thames and Cobham, initiated the creation of Whiteley Village and a fitting memorial to the generosity of its benefactor. Six renowned architects were invited to submit plans for the village layout. Those presented by R Frank Atkinson were duly selected, but subsequently altered to such an extent that only the original octagonal layout of the village centre is recognisable today. Walter Cave was the consultant architect to the trustees.

From The Building News, September 3 1920: “These institutional buildings consist of the Village Club, village hall in the centre and the matron’s house beyond. The accompanying drawing, which includes the plans, was shown at this year’s Royal Academy exhibition. The buildings stand on a terrace set back from the main drive. The illustration of this group is complete and self-explanatory. The architects are Sir Aston Webb, P.R.A., and Mr. Maurice E. Webb, D.S.O., M.C., F.R.I.B.A.

The most complete set of plan*s hitherto issued of the houses erected from the designs of several selected architects for the Whiteley trustees in this charming village at Burhill Park, near Weybridge, will be found in The Building News of the following dates: — The church was also illustrated in two views on September 5 1919. Mr. Walter Tapper, F.KT.B.A., being the architect. Sir Aston Webb’s blocks of houses, including the Whitelev Hall. January 8 and 15. 1919. Those by Mr. Ernest Newton, R.A.. May 31. ” 1916. Others by Sir Reginald Blomfield. R.A.. June 21. 1916. followed on July 25. 1916, by the blocks designed by Sir Ernest George, R.A., and Mr. A. B. Yeates. F.R.I.B.A. Mr. Walter Cave. F.R.I.B.A.. the consultant architect to the trustees, illustrated his houses by photographs in our pages for November 29, 1916, when we gave the houses by Mr. Mervyn E. Macartney, F.R.I.B.A., as well as a general block plan showing the lay-out of them all as carried out.”