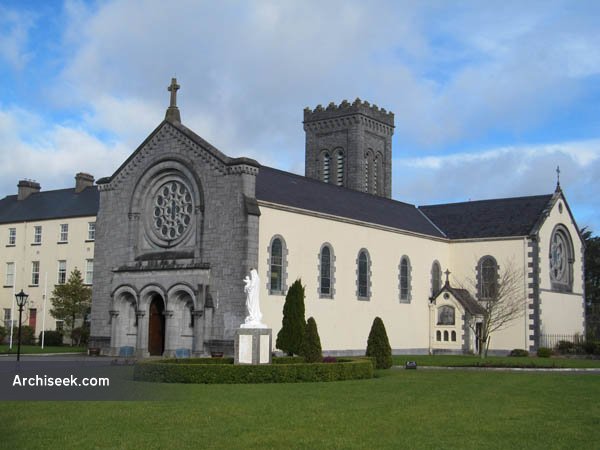 Church of 1820, by an unknown architect, under the supervision of Fr Gannon, the superior at the time, who also supervised the construction of the monastery and the convent. Renovated internally and with a newer facade to designs by W.H. Byrne in the period 1899-1902. “The Abbey records show that in 1897 the community was given permission to borrow money for building and maintenance. The church was completely overhauled, with new ceiling, chancel, aisles and transepts. Two small rose windows, one portraying the birth of Christ, the other the piercing of the heart of St. Teresa were erected over the side altars. Two new altars, one in honour of the Sacred Heart, the other in honour of St. Joseph were erected at a cost of £200. So great were the alterations that only portions of Fr. Gannons church remained intact”. The belltower was added in 1898 to mark the centenary of the 1798 Rebellion.