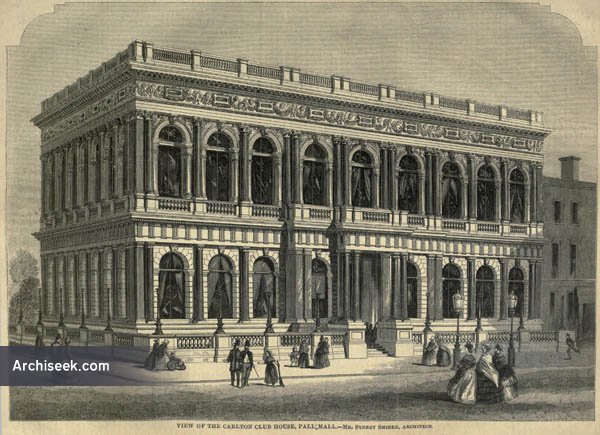 The Carlton Club was founded in 1832, as a party political organisation. By 1835 its wealth and standing were such that it was able to occupy new premises on Pall Mall designed for the Club by Sir Robert Smirke. This was replaced by a design by his brother Sydney. The Caen stone used on the façade of the this building proved unsuitable in the London atmosphere and had to be completely replaced in 1923–1924. St James’s Street became the Clubhouse after the Pall Mall building was destroyed in an air-raid during the Second World War.

From The Building News, February 1 1861: “With the splendid Engraving, on another page, of the renowned Carlton-club, we conclude our series of illustrations of those stupendous buildings which have made Pall-mall the ” great social exchange— the mart of news, of politics, of scandal, and of rumour,” and which afford the liberty of private houses united to the comfort, magnificence, and gorgeous decoration of palaces.

Many, doubtless, recollect the old Carlton— the headquarters of Tory politicians, when the terms Conservative and Liberal-Conservative were unknown— with its bald, cold, Classicality due to the revival of Grecian art in England. Sir Robert Smirke, the architect, has lived to see his work swept entirely away by his brother, Mr. Sydney Smirke, R.A., and superseded by a facade of an entirely different description. The flatness and good proportion of the former work has given place to a front in which boldness of projection and an almost total disregard of proportion are the characteristics. The great size of the upper entablature, especially when compared with the Doric one beneath it, is antagonistic to every known architectural canon ; and yet we admire it exactly a> we admire, spite of the same violation of strict rule, its magnificent prototype, the cast front of St. Mark’s Library, at Venice. It is not, however, a mete copy, as has too often been asserted, of Sansoviao’s work. The famous Library has a range of arcades along the ground story, and the whole of the sculptured work is different. There is, also, in the Club-house a novelty, in the shape of polished red granite columns and pilaster* introduced to compensate for the want of light and shade consequent upon its northern aspect. The panels in the frieze are likewise filled with Peter- head granite. In the Library of St. Mark they are windows.

The facade is 130 feet long, with nine openings on each floor. It it in two orders— the lower Doric, the upper Ionic. There is an arched opening in each intercolumn-iation, the key-stones of which project so as to con- tribute to the support of the entablature over them. It is laced, with the exception of the granite shafts we have already alluded to, with Caen stone.

But it was not solely for the purpose of altering the facade that Mr. S. Smirke was called in. The old Carlton required enlargment. One or two houses were purchased on the western side and appropriated to the club- house which is now second to none in internal accommodation and external magnificence. It contains the usual morning, dining, coffee, billiard and other rooms. The coffee-room is a splendid apartment, 92 feet long by 37 feet broad, and 21 feet 6 inches high. It is divided by Corinthian columns of green scagliola into three compartments ; the two ends are lighted by three windows, and the centre by a large glazed dome. On a floor invisible from the street, the smoking and servants’ bed-rooms are situated.

On the same side of Pall-mall, divided from the Carlton-club only by a narrow street, is its great rival — the Reform. Both are modifications of Italian palaces, and they form as striking a contrast to cacti other architecturally as politically. Pall-mall affords the student, above any street in the world, an opportunity of comparing side by side the best specimens of every stage in Italian art.