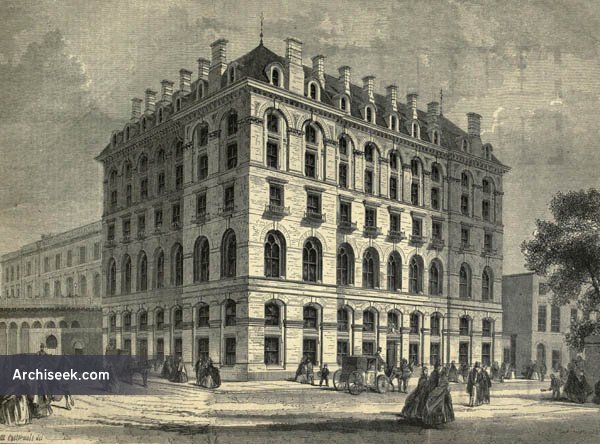 Railway hotel constructed for the London Brighton and South Coast Railway alongside their London Bridge Terminus. However, it was not successful, being on the south side of the river, and was turned into offices for the company in 1892.

Published in The Building News, March 22 1861: “THE monster hotel mania, which we have caught from our Transatlantic cousins, has lately broken out with much vigor in a part of the metropolis where of all others it is most likely to prove useful to those who have no local habitation in London, and where there is every reason to expect a very profitable percentage will be returned on the amount of capital subscribed.

The London-bridge terminus is almost the only one that has not a good hotel in proximity to the station, though, from the fact of its being the great thoroughfare to the Continent, the want of hotel accommodation has been more felt here than elsewhere ; this want, however, will be remedied thoroughly when the extensive building (a view of which forms the Illustration to our present Number) is completed ; and if it continues to make the rapid strides that way it does at present, completion is not many months distant.

The hotel is being erected by a company formed for the purpose, on a plot of ground purchased from St. ‘Thomas’s Hospital, and formerly covered with small and dreary houses built in the once fashionable hole-in-a-wall style.

The design of the new hotel can be referred to no particular style, and so much the better. Mr. Currey, the architect, has displayed much originality in the manner in which he has dealt with a mass of building so nearly approaching a cube in shape. We shall at some future period, when the building is more advanced, publish a detailed description. At present a general notion of the arrangements internally will not be out of place. The basement is entirely occupied by cellarage, and the amount of good liquors capable of being stowed away there will not be trifling.

The ground floor is appropriated to domestic offices, and the principal entrance is on this floor, with the top and back entrance from Joiner- street for the tradespeople. The one pair contains large billiard-rooms, restaurant, smoking-rooms, and private rooms.

Two pair plan (which we engrave) contains coffee-rooms, public, and also for ladies, drawing-room, &c. The whole of the upper floors are occupied by private sitting-rooms and bed-rooms, making upwards of 150 private rooms, besides those occupied by the hotel staff of attendants, &c.

Mr. Henry Currey, of 4, Lancaster-place, Strand, is the architect ; Messrs. Lucas, the contractors. The materials to be employed are white bricks, with Portland stone dressings.

The first stone of the new hotel will be laid to-morrow (Saturday, March 23rd), by Richard BaggaUay, Esq., the Treasurer of St. Thomas’s Hospital.