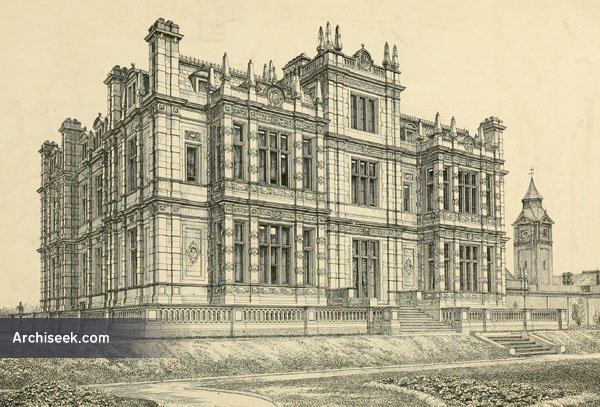 Designed by the architects Charles Barry, Jr. and Robert Richardson Banks, with William Andrews Nesfield advising on the position of the house, and laying out the grounds and gardens. It was amongst the first buildings ever to employ steel girders in the supporting structure. At the time of construction, the estate was the third largest in Norfolk, containing over 19,000 acres.During the Second World War, Bylaugh Hall was requisitioned by the RAF. By 1950, the house was in disrepair – was stripped of its lead and interior fittings, and abandoned. Almost a complete loss, by the late 1990s it was a ruined shell, it has in recent years been restored.

From The Building News: “Bylaugh Hall, the seat of the Rev. Henry Evans Lombe, was built about twenty years since, from the designs and under the Superintendence of Messrs. Banks and Barry, architects, of London, by the Messrs. Piper, of Bishopsgate-street, the contractors, at a cost of nearly £38,000, The mansion is situate about twelve miles north- west of Norwich, and six miles north-east of East Dereham. The style of the building is, as our readers will see, Italian Elizabethan. It was built of magnesian limestone, brought from the same quarries whence the material for the Houses of Parliament was obtained. No decay, however, has taken place at Bylaugh Hall ; there is not a chip or flaw in any part of the building, and all the carvings are as sharp and perfect as on the day when they were finished. The house is very large, and beautifully decorated internally, the ceilings and walls being painted in the same style as the King’s palace at Munich. Two well-executed bas-reliefs, designed and modelled by Mr. Raynard Smith, of London, and representing Peace and War, are placed one over, and the other opposite to, the entrance to the saloon. The park, pleasure grounds, terraces, &o., were all admirably designed for the embellishment of the building, and the property, taken altogether, is one of the most beautiful among the many country seats to be found In this country.”