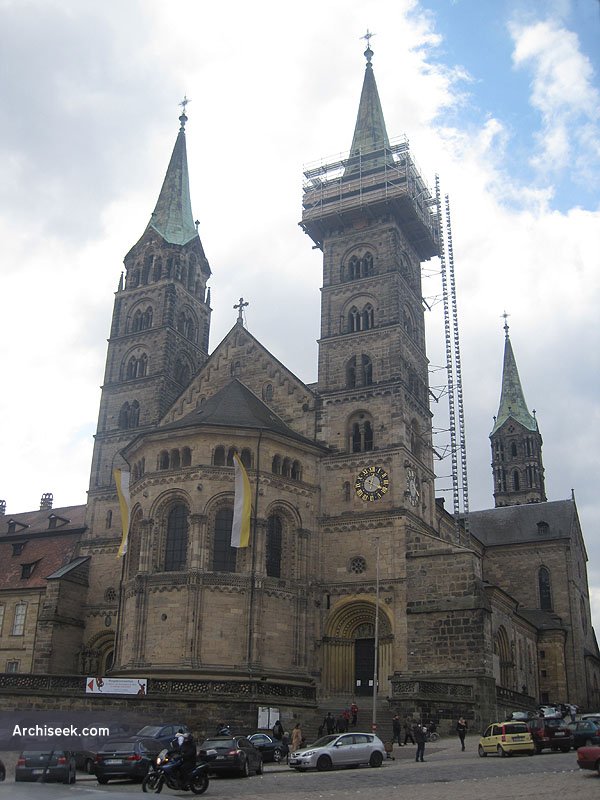 A late Romanesque building with four grand towers. Originally founded in 1004 by the emperor Henry II, completed by 1012 and consecrated on May 6, 1012. It was later partially destroyed by fire in 1081. The new cathedral, built by Saint Otto of Bamberg, was consecrated in 1111 and in the 13th century received its present late-Romanesque form. Each of the four towers are over 250 feet hight with the cathedral itself over three hundred feet long.

On the north side is the Fürstentor (Prince’s Doorway), the principal entrance, with figures of apostles and prophets and a relief of the Last Judgment in the tympanum. On the south side of the east choir is the Adamspforte (Adam’s Doorway; statues now in the Diocesan Museum), on the north side the Marienpforte or Gnadenpforte (Virgin’s Doorway), with the Cathedral’s oldest sculpture (c. 1210).

Of its many historic works of art may be mentioned the magnificent marble tomb of the founder and his wife, considered the masterpiece of the sculptor Tilman Riemenschneider, and carved between 1499 and 1513. Another treasure of the cathedral is an equestrian statue known as the Bamberg Horseman (German: Der Bamberger Reiter). This statue, possibly belonging to the emperor Conrad III, most likely dates to approximately 1200. The statue also serves as a symbol of the city.