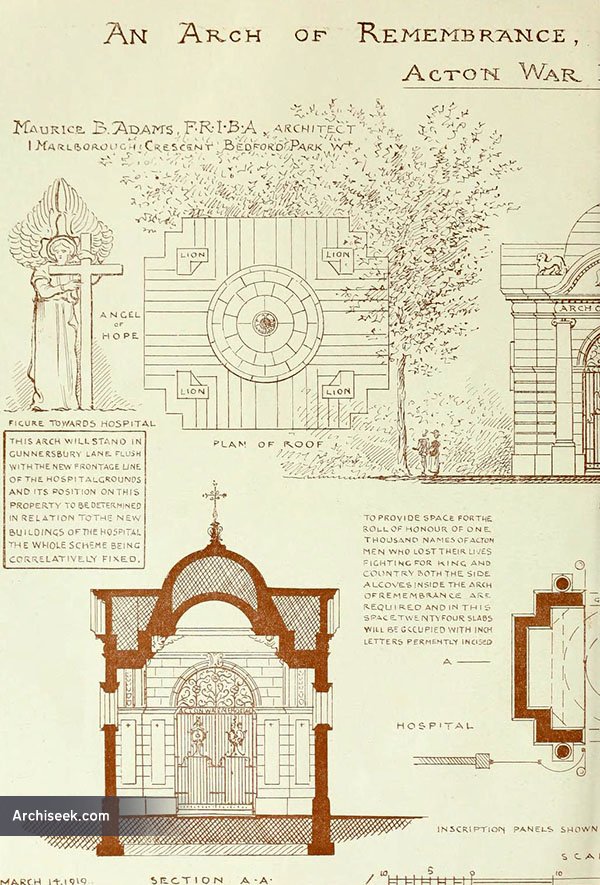 From The Building News, May 14 1919: “An ‘arch of remembrance’ has been unanimously decided on for erection at Acton by the War Memorial Sites Committee, who adopted the scheme proposed by the architect, Mr. Maurice B.Adams, F.R.I.B.A.The building will occupy a site adjacent to the hospital, which is to be enlarged as paet of the intended memorial of the town, but the arch is to be a distinct monument, and it will furnish a mutual field for the roll of honour consisting of over 900 names of the fallen. This will be enriched by heraldic-tinted arms and badges of the ships and regiments represented. The structure is to be entirely of stone, and will have a handsome pair of iron gates.” Never constructed due to the ongoing financial issues in fundraising for the Acton Hospital. By 1923 the War Memorial Wing was officially opened in July 1923 by Neville Chamberlain, then Minister of Health. The Hospital was later renamed the Acton War Memorial Hospital.