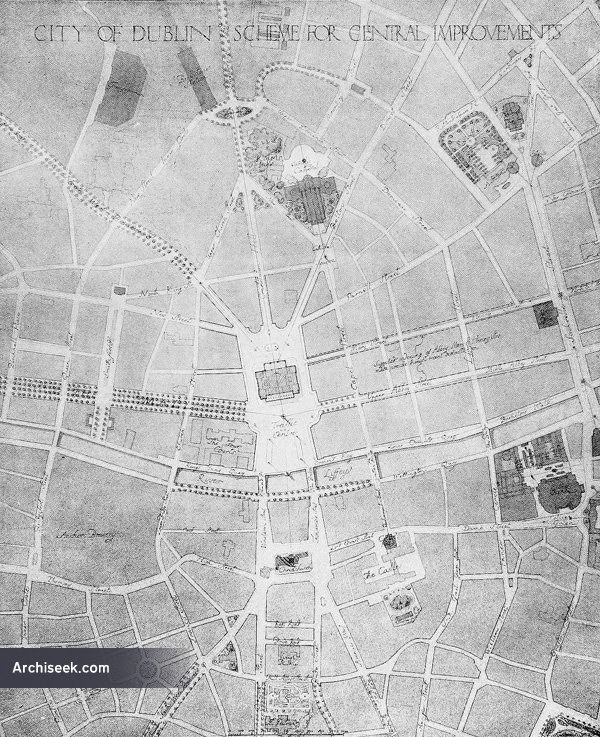 Unrealised scheme to redevelop the markets area of Dublin with a new central station, a Union Station, serving passenger services for all the railway companies of the period. The trains were to access the station via tunnels under the city. The station was to be surrounded by a new central square with radial avenues to the proposed cathedral and to the Phoenix Park.

“The most important feature of the Railway System is the underground connection E. and W., and N. and S., crossing at different levels at the Central Station, a Union Station for Ireland. Dublin is at present most unfortunate in the wide distance apart of its terminals, only connected on the north side by long circuitous loops. The Kingsbridge Terminal, in particular, with its only connection by tram to the centre along the quays, requires immediate improvement.

The first thing to be done is to abolish the overhead connection between Westland Row and Amiens Street, which at present disfigures the whole river section of the City. The Railway Plant clearly shows how the underground connection is to be established, and the fact that its route lies within the alluvial area of the Liffey Valley should not make its construction costly. The N. and S. connection would be a somewhat more expensive undertaking, cutting through rock, and would probably be carried out at a later date than the other. Electric locomotives, such as are used in some of the Alpine Tunnels, should be hitched on for all under- ground connections.

Owing to the existence of the different railway companies, both the northern loops would be retained at first for goods and passenger traffic. If a working agreement could be arrived at by the companies concerned, the goods traffic might all be arranged along one loop. The other loop would still take local passengers for Glasnevin and Drumcondra Stations. ”

“The Phoenix Park Mall is perhaps one of the most notable improvements Dublin could initiate : the possession of the finest town park in Europe should certainly stimulate a city to provide it with a worthy approach. It will be recalled that Gandon suggested that the Wellington Monument should take the form of a triumphal arch at the entrance to Phoenix Park. Unfortunately, his sound advice, which would have given Dublin a rival to the Arc de Triomphe in Paris, was not followed, and an unrelated obelisk was set up in the Park instead. It has been one of the chief concerns of the present proposals to bring this obelisk into due relation with the city, and fortunately it has been found possible to orientate the wide approach from the central square on its axis. It has also been shown how new, but comparatively simple, entrance gates to the Park might be planned on this same central fine. West of the Central Square is found the Smithfield Market, and a proposal will be found further on in this report to bring this fine and much neglected space into fuller use. ”