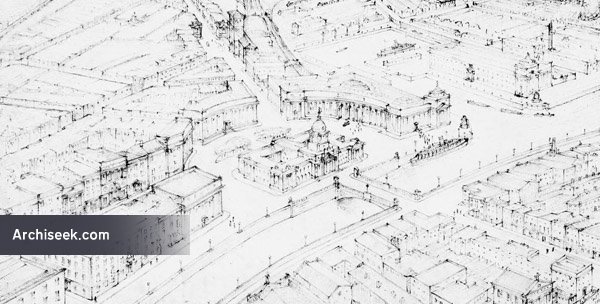 In 1916 the Civics Institute of Ireland held a competition for suggestions and designs for the city planning of Dublin of which the judges were Patrick Geddes (1854-1932), the Dublin City Architect C.J. McCarthy (1858-1947), and John Nolen. The winner was Patrick Abercrombie of Liverpool University. This competitive design formed the basis of the Abercrombie Report published in 1922 which suggested the completion of the crescent around the Custom House by filling in the redundant dock. Since the dock’s construction, the docks had expanded and moved further down river. In addition a new bridge, positioned centrally in front of the Custom House, was to be constructed. The Loop Line Bridge was to be removed and Amiens Street Railway Station extended down to the quayside. All the buildings surrounding the Custom House were to be rebuilt in a Beaux Arts style with the station closing off the Abbey Street vista with a huge colonnade. Abercrombie was influenced personally as an architect by the École des Beaux Arts in Paris and particularly by Baron Georges-Eugène Haussmann (1809-1891) whose city planning of Paris he admired. It was reported in The Irish Times that Abercrombie felt that it was necessary: “…to complete a crescent surrounding the Custom House with buildings for offices of similar purposes which would form a regular setting for the central building.” Nothing ever came of this report and Abercrombie’s recommendations were largely ignored. I

According to the report publication: “The old Dock is filled up in order to complete the crescent round the Custom House, by the erection of a new riverside North WaU Station, which is in direct contact with the existing system of railways and the new underground connection : in contrast with the present North Wall, the station is passed by three lines of cars, giving access both to the City Centre and the Circular Route. The remaining Dock forms an adequate and convenient passenger harbour, and the building on the opposite side is the warehouse for the cargo carried by these boats ; the inner dock is also utilised for this purpose.”