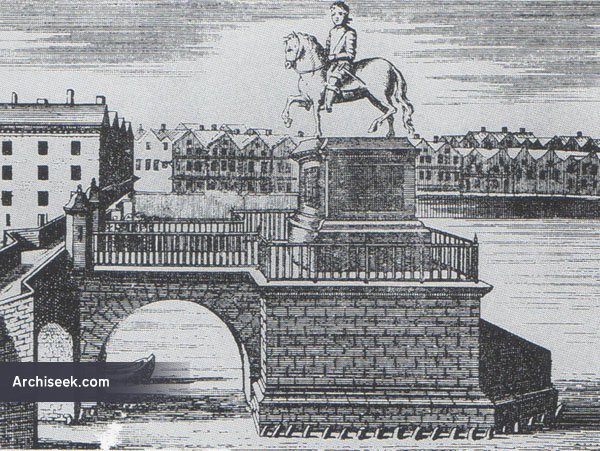 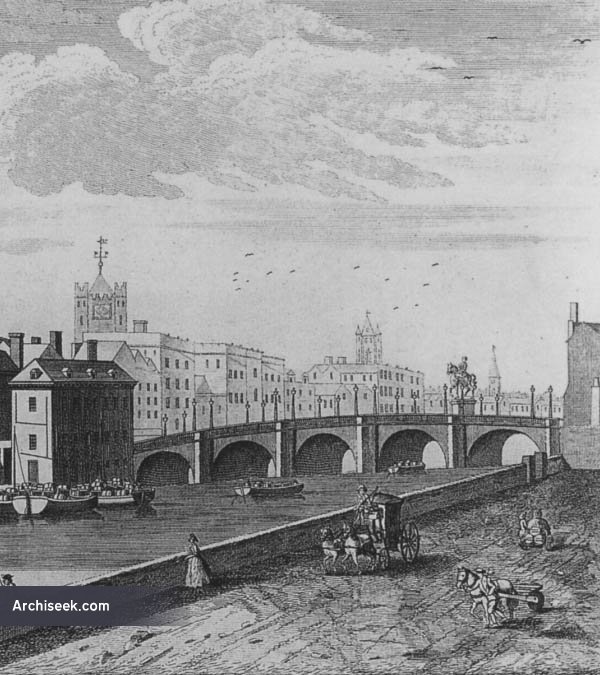 Erected on a elevated pedestal on the upstream side of what was then Essex Bridge in 1722. Commissioned in 1717 as “a grateful acknowledgement of the many favours conferred on this city by his present majesty King George”. By 1753, architect George Semple found that the statue’s pedestal was a danger to the stability of the entire bridge, after a partial collapse of an arch.

Semple’s comments on the failure of this bridge, “All the piers were orignally built on frames of oak of about 9 or 10 inches square, the clear of which was just the size of the pier from out to out, the bottoms were made of 2-inch oak board dovetailed into the frame cross-ways, but done in very coarse rough work; these frames were laid on the bed of the river on which they built the piers, the increase of the rapidity of the water between the piers sunk and carried off that bed of the river left between the piers,and continued to sap and gull the frames every flood, and the base of the effigy [statue] gave a new direction to the current, for that on the south side was directed to the pier, L, where it was obststructed by the ruins of the former arch, and as it hurried back to get into the third arch it sapped the foundations of the footway M, and on the north side the strength of the current was directed to o, where it did full execution on that pier, and then made its way to R, where, meeting again with the currents that ran through the third and fourth arches, they struggled together, and so wore away the bed of the river to 23 ft. 8 in. deep, and some times deeper just as the flood and ebb happened to leave it.”

With the construction of a new bridge to Semple’s design, the statue was removed. It eventually ended up in the garden of the Mansion House in 1782. At one stage in the early 19th century, it was suggested for the centre of Fitzwilliam Square, but this never materialised. In 1937 it was sold to the Barber Institute in Birmingham for 500 pounds – it cost the city 2,000 pounds in 1722.