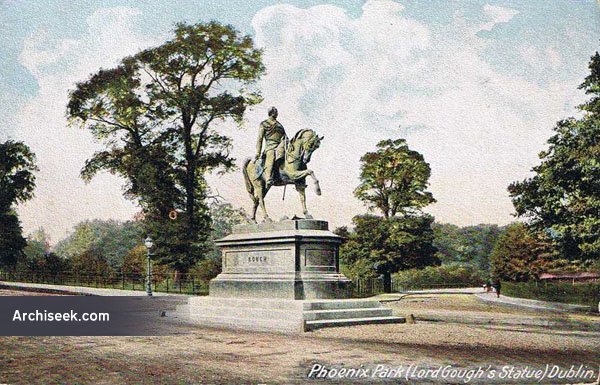 Eerected in 1878 in Phoenix Park in honour of the British commander Field Marshal Hugh Gough who rose to commander-in-chief of British forces in India. The statue was proposed in 1869, but Dublin Corporation turned down the various sites proposed including the then Carlisle Bridge, Foster Place and Westmoreland Street. At one stage, a site in O’Connell Street was under consideration for its placement. The discussion reached the pages of The Building News in London: “A meeting of the Viscount Gough Statue Committee was held in Dublin on Saturday, to decide as to the site of the equestrian statue, the Government having offered one in Phoenix Park, of which, indeed, the contractor for erection is in actual possession, and the Dublin Corporation one in the centre of the great thoroughfare of Upper Sackville-street. The former site was generally considered the most suitable from an artistic point of view, but several members said the latter was more prominent, and wished rather to accept the offer of the civic authority than that of th e Government. Eventually a majority of the committee decided in favour of the park site.”

Designed by John Henry Foley, who died before completion, the horse was cast from a previous statue by Foley of Viscount Hardinge. The statue received much abuse before its demise, losing its head and sword in 1944, a rear leg in 1956, before being finally blown off the pedestal in 1957. Described as one of the finest equestrian statues in Europe and at the time the only equestrian statue in Dublin. It stayed for several years at a graveyard for removed statues at the Royal Hospital and is now in the UK.