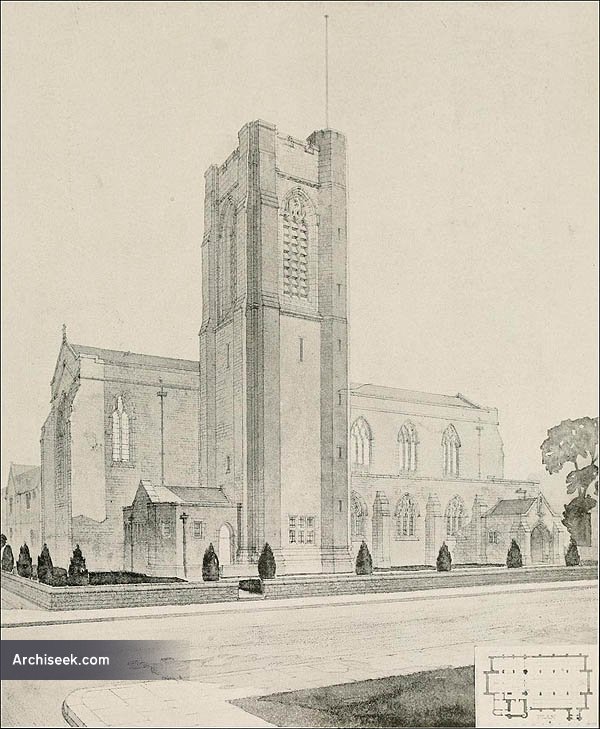 From The Building News, October 29 1920: “This church is to be erected on a corner site at the junction of Tinrratt Lane and Beildon Valley. It consists of nave and aisles divided into four bays. The chancel is spacious with a side aisle on the south ; vestries and sacristy, as weIJ as a doorway, on the north. The tower at the east-end of the north aisle contains the choir vestry and organ chamber, with belfry above. The north porch is the main entrance, an exit door being put at the east-end of the adjacent aisle. Accommodation is provided for 504, including fifty seats in the choir, but 540 persons could be seated on special occasions.

The design internally is founded, by request, on the Church of St. Peter, in Wimbledon, by the same architects, Messrs. F H. Greenaway and J.E. Newberry, of Parliament Mansions, Victoria Street, S.W. The nave arcade is similarly treated with lofty arches enclosing the clerestory windows, a low arcade opening into the aisles, but in this case, instead of lancets, the windows and details internally are of a late fourteenth century character. The open timber roofs arc of low pitch over nave and chancel, the ceilings of the aisles being flat and panelled. The chapel is to be vaulted. The internal walls are plastered. The drawing reproducted was in the Royal Academy Exhibition, closed this autumn.”