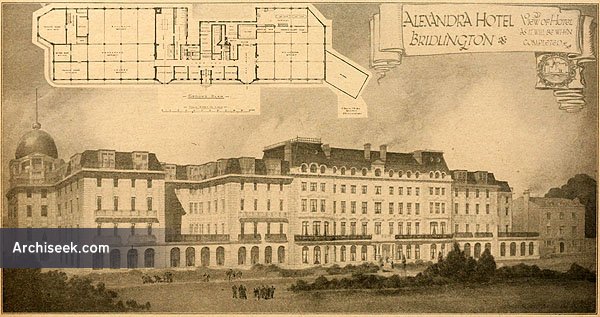 Unbuilt extensions to the Alexandra Hotel – the central bock of nine-bays with a further three-bays to either side comprised the original hotel. Demolished in the 1970s after many years of decline from its high-class heyday.

Published in The Building News, August 20 1920: “The present hotel, which occupies a commanding position on the sea front on this East Coast resort, has a frontage of 125 feet; by the proposed extensions this will be increased to 362 feet. The extensions have been designed to give a maximum number of bedrooms with a view of the sea. This advantage has been obtained by projecting wings on the upper floors, the spaces between being available as roof gardens. The method of construction adopted consists of structural steel frame- work, the floors being of reinforced concrete and the partitions on the upper floors of patent slabs. The outer walls are of brick, each storey being carried by the steelwork independently of the story below. The ballroom and promenade or lounge will form one large room. There will be dividing screens to accommodate differing requirements. The new bedrooms, of which there will be 220, will be heated by hot-water radiators and ventilated by means of ventilating shafts. There will be no fireplaces. Each bedroom will have a lavatory basin, with hot and cold water supply. The extensions have been designed with a view to carrying out the work in sections. Buildings at present occupying the site will be removed one by one as the extensions proceed, the remainder being left for occupation in the meantime. This necessity has largely influenced the planning and the method of construction. The architect is Mr. Percy Bown, F.R.I.B.A., of Bridlington and Harrogate.”