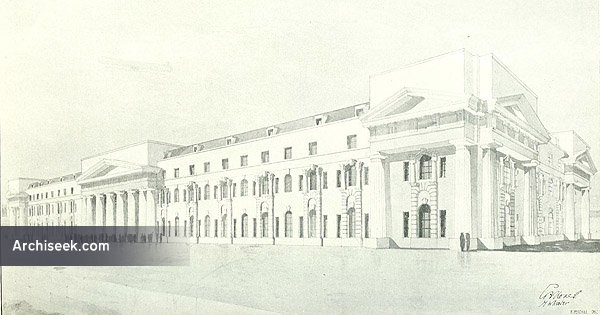 Unbuilt proposal for a large railway terminus to serve a trans-atlantic liner terminal that would have seen Liverpool ousted not just as the transatlantic departure point for British passenger traffic, but for Scandinavia too. As one commentator put it, “make Ireland the highroad of traffic between Canada and the United Kingdom and between the Eastern and Western Worlds”, and a local MP declared that its effects on world commerce would outdo “the Panama Canal”. With the provision of rail ferries from Holyhead, it was predicted that Londoners would leave Euston Station and not have to set foot outside their carriages until Mayo.

From The Building News, 13 October 1915,: “We give to-day an interior of the station hall or concourse, with an exterior perspective and plan, reduced, on a separate sheet, with the entrance elevation of this station, which has been designed to be built on a reef of rock projecting into Blacksod Bay, and to be a terminus for the Transatlantic traffic. The largest liners are able to berth at the end of this reef, which is the occasion for the railway station being so placed. The construction of the building is intended to be carried out in reinforced concrete. The main feature is the concourse, which forms a waiting-place between the platforms and the harbour. The interior perspective shown by our double-page plate was included in the Royal Academy Exhibition this year. The architects are Messrs. E. B. Hoare and M. Wheeler, F.R.I.B.A., of Portman Street, Portman Square. W.”