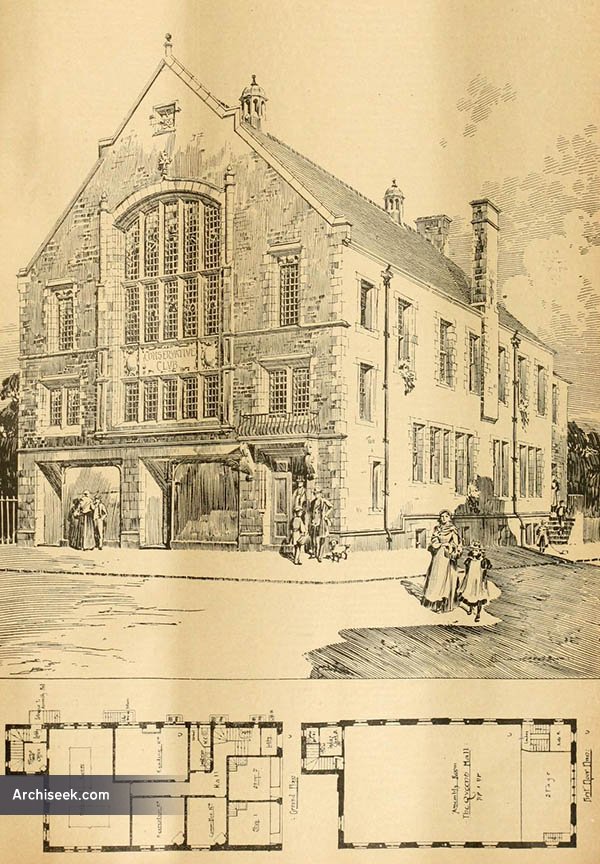 “This building, which was recently opened by Lord Wenlock, was designed by Mr. J.W. Broughton, architect, of Skipton, whose plans were selected in a limited competition. The general design is a Free Gothic, and the building comprises the usual club-rooms (all of which are on the ground floor), a large assembly hall, 7’2ft. by 37ft. 6in., called ” Queen’s Hall,” two lock- up shops, and cellaring under the whole, most of which is let as an aerated water manufactory. A feature is a supper-room, 15ft. by 15ft., between the shop ceilings and the stage floor. The (Queen’s Hall has an open-timber roof, and its acoustical properties are said to be most satis- factory. For use in connection with this hall are provided retiring-rooms and lavatories, and the supper-room serves as a retiring-room for dramatic performances. The stage is fitted up with fire-hydrants, &c., to comply with the requirements of the West Riding County Council. The exterior is faced with excellent local (Tupper Hill) stone, though part of the front is of Yorks parpoints, and the roofs are covered with Burlington slate from the Duke of Devonshire’s quarry. The heating is by hot water (low pres- sure). The principal contractor was Mr. W. Sagar, of Barnoldswick, and the clerk of works Mr. Thos. Briggs.”