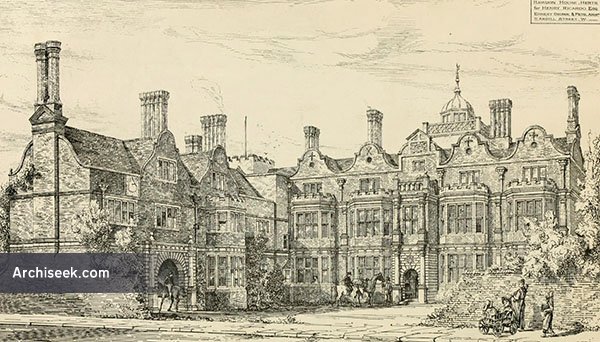 “An interesting old building, bearing the date 1622 ; to this the architects have been adding a wing for Mr. Henry Eicardc, the owner. The choice of material had to be made in adding to a buildins; that had been ruthles.sly stuccoed. On peeling off the cement from the old work, interesting brick mouldings and pUasters were exposed ; and great care has since been taken in bringing again to light the red-brick walls which fixed the character of the new work. The house stands back some “Oft. from the high road. It was decided to add the additional rooms in a wing between the house and the road, forming a courtyard in front, with a gateway to the stables, and covering the site of a recent badly- built extension, which was out of character with the old house. The new wing contains a dining-room, schoolroom, nurseries and bedrooms, and a lift from tlie oificcs, and other such conveniences, of which the old house was innocent. Thi billiard-rocm is oak panelled, after the manner of the original rooms. A sundial makes a pleasing feature on the south front of the new wing, and the new and old work blend harmoniously. The new building and works to old front have been very satisfactorily carried out by Mr. Hunt, of Hoddesdon, at a cost of between four and five thousand pounds. Mr. J. B. Gass, of Bolton, has had charge of the works, and has shown great care in their superintendence. ” Published in The Building News, July 2 1880>