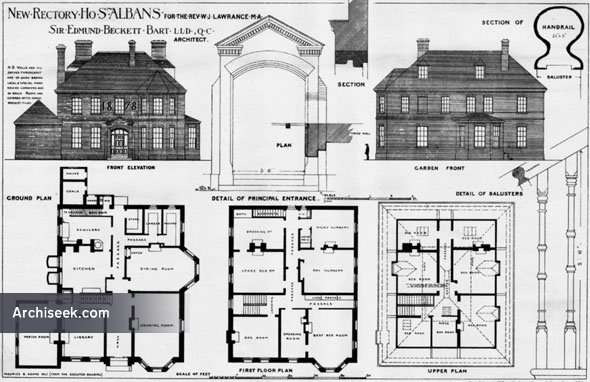 Published in The Building News, November 21 1879: This new rectory house for the Rev. W. J. Lawrauce has recently been built, and is just now being completed. It is in the grounds adjoining the Abbey, and was erected from the designs and under the superintendence of Sir Edmund Beckett, Q.C., the well-known and distinguished author of “A Book on Building,” and other architectural works. From this fact it will be of unusual interest to our readers, and our drawings have the additional value of having been taken from the building itself. The details clearly show the character of the work, which has been exceptionally well executed by Messrs. Longmire and Burge, the builders who are restoring the high-pitched roof and nave of the Abbey. Mr. J. Amey was the foreman on the work. The cost has beeu about ,£4,000. The walls are built of local purpose-made bricks, of a uniform dark purple colour, the same material being used for the arches and cornices. The sills are of rubbed Tork stone. The outer slopes of the roof are covered with Broseley dark-brown tiles, and the inner slopes are covered with slate, like the bay on the garden front. The interior gutter of roof discharges itself by a gutter, carried over the attics at the ceiling- line, on to the outer slope of the roof on the north side, as shown by the upper plan. The joinery to the principal rooms is of Oregon pine, and the staircase and balusters are of pitch-pine, sized and varnished. Oregon pine is a very beautiful wood, but is not much known in joinery. It was introduced here by Mr. Longmire, and certainly it is capable of producing an effect superior to other descriptions of white wood, either for French polishing or varnishing. It is free from knots .almost entirely, and is possessed of a good, but not violently marked, figure, so often conspicuous in pitch-pine and other similar woods. The mantel-pieces in the dining-room and library are old oak examples introduced by the rector, who also furnished the modem semi-Gothic oak mantel in the drawingroom. The front door is grained oak and varnished, and the sash bars to the windows are finished in a dark colour. The several arrangements are carefully shown by the three plans which we give, the roof planning and skylights to top rooms being dotted on the upper plan. There is no step, as the line shown on the ground-plan would suggest, to the principal w.-c. adjoining the kitchen-door and parish entrance.”