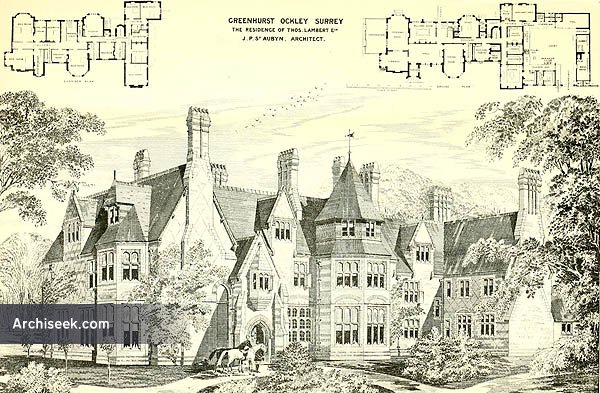 In the early 1990s the mansion house was divided up into 17 fine apartments and the stables and outbuildingsconverted to 11 cottages. Twelve new houses were built in the grounds and leisure facilities include an underground swimming pool and gymnasium inthe vaulted cellars. The two acre walled gardens were sold separately andthe garden buildings converted to domestic use.

From The Building News July 31 1874: “This house is situated about a mile from the Ockley Station, on the London, Brighton, and South Coast Railway, and standing on a gentle slope with a south-west aspect, it commands an extensive view of Leith-hill. The total length of the main building is 107-6ft. and the depth 56ft. The walls are built of red brick, with Doulting stone dressings, and the roofs are covered with Staffordshire tiles. The porch, by which the house is entered is on the east side, and open* into the hall, 31ft. by 18ft ; from the hall direct access is given to the library on the left, 27ft. by lilft. ; to the drawing-room 29ft. 5in. by l1ft. ; and to tho dining-room, on the right, 30ft. by 18ft. Access to the billiard- room, 16ft. by 24ft., is obtained from the main staircase. The study has a separate entrance from the garden, besides that from the house, and is provided with lavatory, &c. The principal staircase is placed between the study and billiard-room. Ample office accommodation is provided, including servants’ hall, 22ft. by 16ft. ; housekeeper, 15ft. by 14ft. ; butler’s pantry, with safe and sleeping-room, adjoining kitchen, 20ft. by 20ft. ; cook’s pantry, larders, &c., being arranged to the north. The cost of the house has been about £11,000, and of the stables .-£2,000. The works have been carried out by Mr. Shearburn, of Dorking, from the designs of Mr. Jas. P. St. Aubyn, of Lambe-building, Temple, London. “