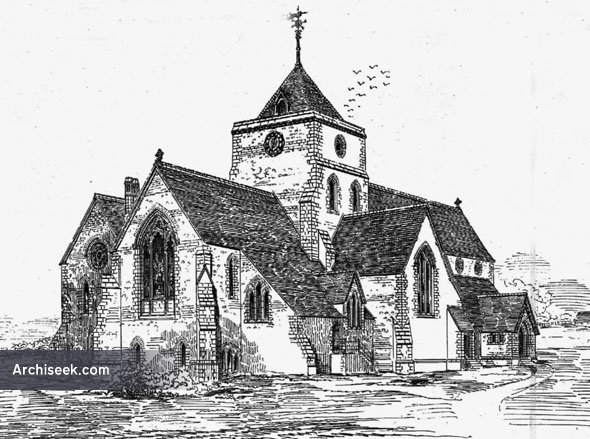 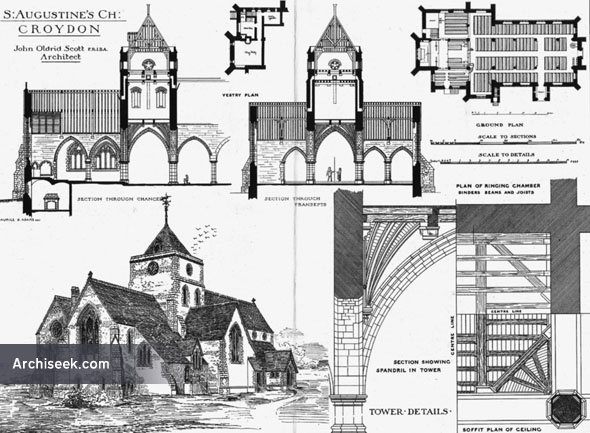 St Augustine’s church is a distinguished building, predominantly in the Decorated style. However, the window tracery of the side aisles is Perpendicular. As originally constructed, it consisted of a nave and chancel, with side aisles extending the full length of the building, the east end of the north aisle being used as a Lady Chapel, which continues at present; north and south transepts, a central tower, a polygonal baptistry at the south east corner, and a north west porch. Reordered by Paul Darrington in 1987. Listing: grade 2*.

“Tins church is to be built in a new district which has grown up on the south side of the town. It will stand well on the slope of a hill by the side of the Brighton-road. It has been designed on the model of some of the old churches of Surrey and Sussex, and like many of them, will depend for its effect more on its grouping and quiet colouring than on any richness of detail. The materials will be flint, with a proportion of Bargate-stone, Box-stone being used for dressing.^. Internally, the church will be faced with chalk ashlar. Its chief feature is the central tower, and it has been the architect’s object to design this so as to be no construction internally. It will be carried by columns of hard Portland stone of no very great diameter, great attention being of course paid to the construction of the arches connected with it. The part to be built at once includes the chancel with its aisles and vestries, which are below, the tower, and the two transepts. The contract has been let to Mr. Carmthers, of Iveigate, the amount being £.5,2.53. The architect is Mr. J. Oldrid Scott.” Published in The Building News, November 25, 1881.