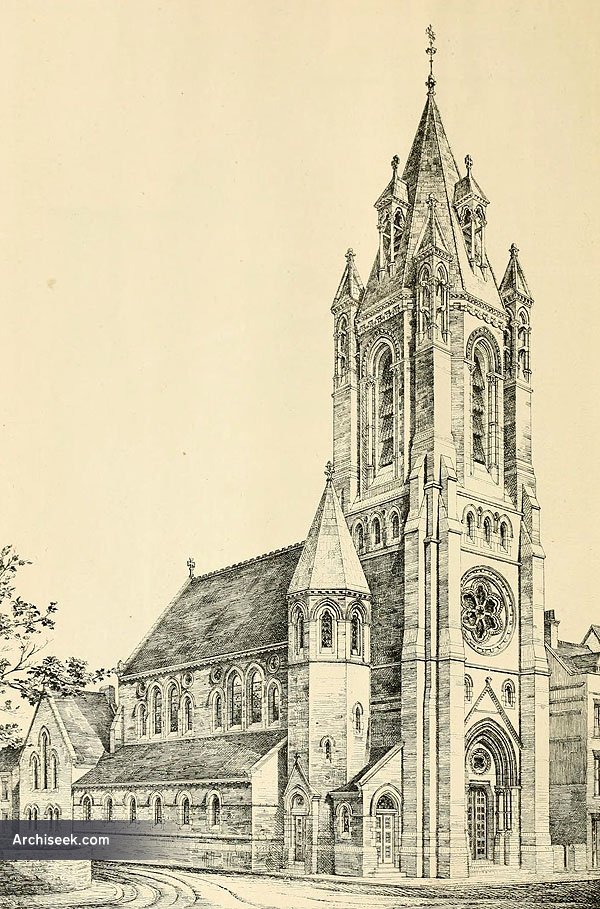 Published in The Building News, October 30 1874: “The object aimed at in this design was to put tho whole congregation in sight and hearing of the service ; and to do this without having recourse to thin columns and flimsy construction. The narrownoss of the site prevented the adoption of any plan involving either transepts or a large central area ; and to gain the required accommodation, it was found necessary to build up almost to the extreme boundaries of the ground. Hence the nave shaped itself as an unbroken oblong, and it only remained to see how the roof could best be carried, and especially how the clerestory (which, from the nature of the surrounding buildings, was almost a necessity for tho proper lighting of the interior) could be supported with least detriment to sight and sound. Under these special circumstances it was determined to try the experiment of a nave-arcade in two bays, with arches of unusual span. The sittings arc so arranged that the obstruction from one nave-pier only affects the alley or passage between the seats ; while that from the other is inconsiderable. A secondary object in the design by the wish of the Committee, had to form one of the external features. By making it open into the end of the nave, and filling it with a deep gallery supported on a stone arcade, it was made to contribute about 130 towards the total of 700 sittings. For acoustic purposes, and to shut out extremes of cold and heat, the nave has an inner wooden ceiling, of a lower pitch than the roof. The apse-ceiling is also of wood, of a curved form divided into panels, which were intended to receive a series of subjects suggested by the 148th Psalm. The inscription round the base of this ceiling is from Chronicles, 29th chap., 11th v., and is executed in Rust’s mosaic. Tho rest of the coloured decoration is still incomplete. The existing pulpit and Communion-table were not designed by the architect. The stained glass in tho apse windows, comprising single figures and small groups from Scripture history, was tho work of Mr. Loach, of Cambridge. The church is built externally of Yorkshire parpoint and Ancaster stone ; the nave piers are of Darley Dale stone, and the walls are lined throughout with Bath stone ashlar. There is a carefully-studied system of ventilation, worked by a gas-stove and perforated air-trunks. The builder was Mr. Horsman, of Wolverhampton; tho foreman was Mr. Hopcroft ; the principal part of the carving was by Mr. Harp, and Mr. James Cubitt was the architect.”