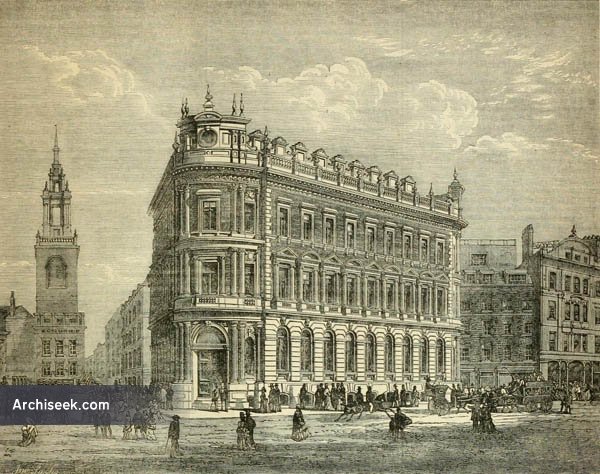 Incorporated in May 1872 as the National Safe Deposit Company Ltd, the company changed its name to the National Safe Deposit and Trustee Company Ltd on February 1 1928, later becoming the General Accident Executor and Trustee Company Ltd. It was formed to provide fire and burglar proof accommodation for the storage of valuable items. The company built specialised premises at 1 Victoria Street, London, which contained the first safe deposit building in the country. A vault measuring 80 feet long, 46 feet wide and 45 feet high was excavated and 2,000 tons of chilled armour plate were installed. The completed building had four galleries of vaults in a basement that was 60 feet deep and protected by brickwork, a steel plate and six feet of concrete. In addition, the waters of the Walbrook, one of the ancient hidden rivers of London, flowed underneath, offering a natural defence against tunnelling. Building costs ran to £250,000. Now the City of London magistrates’ court.

From The Building News, November 7 1873: “ON Tuesday last the interesting ceremony of laying the foundation-stone of these premises, about to be erected near the Mansion House, London, took place. The stone was laid by Sir Sidney Waterlow, Lord Mayor, in the presence of a largo company. One of the problems which modern science has to solve is the production of an impregnable safe which shall at the same time be fireproof and thiefproof. Up to the present time the problem has not been solved in this country, but has, it is said, been satisfactorily solved in America. In Chicago, and other places, they have erected buildings so strong, and placed in them safes equally strong, as to baffle all the attempts of scientific burglars — and scientific burglary has been cultivated in America to a much greater extent than it has in this country. Indeed, it is a humiliating fact that men gifted with considerable intelligence, patience, and courage, should prefer devoting their abilities to criminal pursuits — men, who, had they directed their gifts in more honourable channels, would undoubtedly have become engineers, and so blessed society. Up to the present time we have had no building in this country wherein could be deposited, with something amounting to absolute safety, precious documents, diamonds, or, in fact, any- thing portable and of great value. To meet this want, a company was formed about twelve months since. A suitable site was obtained, adjoining the Mansion House, in the very heart of the metropolis. The architect selected for the production of the building was Mr. John Whichcord, F.S.A., the engineers were Messrs Easton and Anderson, and the builders Peto Brothers. Judging from the appearance of the foundations, the substantially built walls, and the general arrangement, we believe a structure will be reared from which no thief will be able to abstract treasures, no fire, even such a one as half burnt Chicago, will consume, and which will require an earthquake to overturn it. We give above an illustration of the new building as it is to be externally. But the building as it appears gives no adequate idea of its depth and strength and internal structure. The superficial area of the building is 6,500ft. The exterior and party walls are of extraordinary thickness and strength, and in the interior, but completely detached from every part of the external building, there is constructed an impregnable vault, 69ft. long by 32ft. wide, and 301t. high, divided into four chambers of four floors, each having a cubical capacity of l,889ft. and a floor area of 332ft. The great vault is built on arches, so that tho whole of it, top, bottom, and sides, may be constantly, day and night, under the view and inspection of the Company’s armed watchmen. Its walls are of immense strength, and it is further protected by an unapproachable and impenetrable burglar- proof armour-plating. We extract tho following from the Company’s published statement : —

“To effect its objects, the Company is fitting up, in its groat vault, over ten thousand lock-up repositories, varying in size from a few inches to two feet square, and with a uniform depth of 20in.; so that all classes of depositors may obtain the requisite accommodation, without incurring unnecessary expense. These repositories may safely be said to be the first that were ever constructed in this country so as to be absolutely safe against fire, robbery or riot. There is, further, a space, equal to more than one-half of tho space required for the repositories, and in all respects equally strong, reserved for the reception of plate-chests and other comparatively bulky articles ; and there is also a space, equal to rather less than one-half of the space required for the repositories, but of precisely similar construction, which will be appropriated to tho reception of such securities, &c., as may be lodged directly- with the Company, instead of being locked up by the depositor himself. To go a little more into detail of the safety accorded by the Company’s repositories, it may be mentioned that, in addition to their own great strength, they are surrounded by two walls of the aggregate thickness of 2ft. at the narrowest parts, and constructed of the best and hardest bricks. To many people, who are only acquainted with mere ordinary brickwork, this may not sound immensely strong ; but let them try their baud on the first specimens of selected blue Staffordshire brick that fall in their way, and they will alter their opinion. These walls are backed up with from 4 to 10ft. of the best concrete, and tho whole is further protected on the inside by a composite armourplating of 4in. This plat eis s strong that an iron weight of 32cwt., with a perpendicular fall of 18ft., failed to break it up, while- in hardness it is superior to spiegeleisen and more difficult to drill. The doors of such a structure are generally its weakest points, and, therefore the Company’s doors are made equal in strength, to tho strongest part of the vault — indeed they are of unprecedented strength, being ponderous masses of metal and fire-and-drill-proof cement, weighing about four tons each. Again, tho weakest parts of most doors are their joints and locks, and, therefore, tho Company decided to have neither joints or locks. Tho number of these doors requisite for the vault is thirty-two — thirty two doors so massive that, having no hinges, no amount of manual labour that could be applied to them would move them ; and, having no locks or keys, there must necessarily be provided some other means of opening, closing, and securing them.”

All those contrivances must have taxed the ingenuity of the architect and the engineers of the Company, as they indicate novel contrivances, in this country at least. As, according to Walpole, and many “who believe in him, that every man has his price, it may he said that unassailable locks and safes must be under the care of some one, and in proportion to the treasures so carefully guarded, so may temptations be offered to corrupt tho custodian or custodians. Mr. Whichcord, in his most appropriate speech, in answer to the Lord Mayor’s appeal on Tuesday last, said they had even provided for such a contingency, but in what manner, of course, he did not communicate.

One of the most interesting matters connected with the operations of the company is the finding of antiquities of great variety and of great value, about which we shall say more next week, when we hope to illustrate some of the rare specimens of Roman art discovered.”