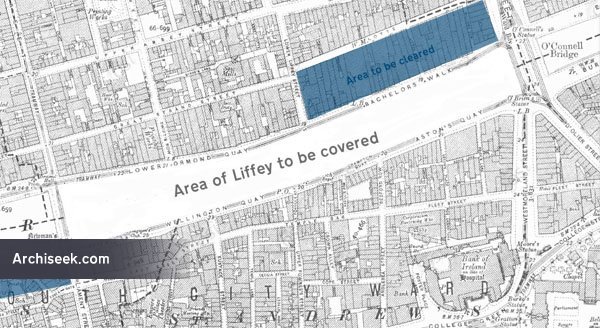 From The Building News, January 12 1872: “LONDON has not a central station, and what London can do without (says the Railway News) can scarcely be an absolute necessity in Dublin; nevertheless, we find it is proposed to erect one over the Liffey, for want of a better site, some place about where the Mital Bridge spans that stream. The projector does not propose to imitate the vandalism of the man who lately proposed to carry a line from King’s Bridge down the northern line of quays, for he would have his central station connected with the existing termini by means of subterranean lines; but then a huge gazabo, like that which he recommends, planted squat upon the river, would as effectually destroy the whole aesthetical effect of the quays. Standing upon Carlisle Bridge it would no longer be possible to enjoy the charming vista which ends with the view of the river just emerging from green fields to make its way through the crowded haunts of men. Correct taste rises in anger to oppose such a scheme, even if it were required, or even if the advantages to be derived from it were commensurate with the cost of its erection, which would be indeed far from the case. The central station would be seen to share the fate of some other very ambitious buildings in Dublin — as, for instance, the Royal Exchange, where the little boys used to assemble to shoot marbles before the Corporation made it their house of assembly.”

This is probably a reference to the Frederick Barry proposal of 1872, which was considered by a committee in the House of Commons. It would have meant the construction of a large station in the Dame Street area. Barry was a engineer, largely working on railway projects around Ireland. The project seems to have been ill-thought out, raising the ire of both the architecture press and even the commentators on the railway industry, on whose support the scheme would have required in order to gather investors.

From The Railway News, February 9 1872 under the biased headline “The Dublin Leviathan Station”:

“In recent numbers we noticed some of the efforts making in Dublin for invading the city so to speak with a monster central station as near as possible to cover over the best portion of the Liffey. We were not quite prepared for the Leviathan project, worthy the go ahead views of our cousins at the other side of the Atlantic. We have taken the trouble of making some inquiries as to the details, but we were not prepared for the moonstricken ideas which the project lead us to suppose must have guided the originators of it. How a scheme could be reasonably proposed even for the “second city the empire”, with its population of some 300,000, puzzles us to but we give the details of the design, and to our readers who the Irish metropoli,s the grandeur of the notion, if not the wisdom it, to say nothing of the practicability of carrying it out, will be manifest we doubt not. The capital share and loan is proposed to be 750,000 but we imagine it is impossible that the line can cost less than 2,000,000. The line leaves the up rails of the Great Southern and Company at King’s Bridge Station, passes through the side underground of their station building under the office, continues under the South Quays, until it passes Essex, when it immediately commences to rise and gains the surface Metal Bridge by one in forty gradient. In order to rise it takes water at Essex Bridge and for that purpose narrows the river there first building an inside parapet wall shutting out the water so that will be constructed and rise between the two walls, and in the same it descends from the Central Station at the eastern side. From the side of Central Station the line will be forked viz: A line descending I in 40 under the South Quays and Westmoreland/ street and rising to Kingstown line a little below Westland row Station by 1 in 40 and thus the traffic from Westland row down will cross the proposed traffic up. A line descending I in 40 under the North Quays and Sackville street, and rising I in 40 to join the Dublin and Drogheda line running through Amiens street station.

The traffic is then to be carried over the Drogheda line as far as Canal Bridge, from which point a branch is to be made to the premises of the London and North Western Company, and also to the extreme end of the North Wall, passing over the authorised line of the Dublin Port and City Company, and taking the ground there over which that company have parliamentary powers and where they commenced their works which were suspended during the commercial monetary crisis of 1866. Approaching the North Wall a junction is also proposed to be made with the Liffey branch of the Midland Great Western Railway, over which and back over the Dublin and Drogheda Company’s line it is proposed to enable the traffic of that line to reach the Central Station.

The Central Station is to be constructed on iron girders which are to span the River Liffey between Carlisle and Essex Bridges. which is to be covered in from bridge to bridge, on which this structure is to be erected. The property between Merchants Quay and Essex Bridge, as well as that on Bachelor’s walk is referenced to be purchased for the purpose of the works .

It went on to explain how the 1 in 40 grade required, along with curves, would mean that the current Irish rolling stock would be incapable of making the terminal, and that the engines required “would be useless for the purpose of hauling the traffic of Ireland passing through Dublin and even for working light local trains for any local passenger traffic which might present itself the expense would be enormous”.

“A meeting held on Monday last in Dublin, at the office of the solicitors for the promoters of the “Dublin Central Station Railway Bill”, obliges us, though reluctantly, again to call the attention of the Dublin people to the fatuity of supposing that any Central Station Railway would serve Dublin, or if constructed, result in anything but disaster to any shareholder who could be induced to subscribe to it. We thought that the experience of metropolitan railways in other parts of the country, and the observations we deemed it necessary to make on this subject in our publications of 13th January, 3rd February, and 9th March last would have had effect of inducing the promoters of the “Central Station” Bill now pending, the fourth which has been brought before Parliament, to have abandoned the idea, and saved themselves and the few other who may be induced to subscribe to the preliminary expenses for the benefit of the professional promoters.

We have the file of the Dublin papers of Tuesday now before us, reporting at much length the explanatory statement of Mr Frederick Barry CE (he, Mr Tumbull a Parliamentary agent, and Mr John W Kelly, a most respectable railway contractor being described in the bill as directors or promoters). which appears to us to show quite sufficient reasons, when closely analysed, why a central station and especially such a one as that proposed by the bill would be a nuisance instead of an advantage to Dublin City, apart from the folly of the enterprise in a commercial aspect. We feel it incumbent upon us again to warn our readers and subscribers from being misled, and as we cannot afford space to state our objections in detail, we refer them to the previous articles which we have written on the subject.

It cannot be denied that a “central station” in Dublin, as in other cities, would be a great “personal” convenience and a “trading advantage” to many persons residing or carrying on their business in its immediate vicinity, but it is not their interest which Parliament will have to consider, whose duty will be to protect that of the public and unreflecting investors, who might be induced to lose their money upon the assumption that if Parliament pass the bill the undertaking must be a safe investment, and one necessary for public requirements.

That the measure is one not supported by the monied interest of Dublin is pretty clearly established from the facts disclosed at the meeting which was convened for the purpose not of subscribing the nominal cost, as stated, of 600,000 – though that with a million added would be nearer the mark – but for providing for the promoters 2,000 or 3,000 to pay the expense of the application to Parliament, an appeal which was responded to, according to local papers, with the following magnificent result: – 360 10s subscribed in the room. How has that sum been made up: Mr Pim member of a firm who most unquestionably have a deep interest in having a central station constructed 100; Mr JW Kelly the respectable and successful contractor already referred to 200; Mr Sterling a steam bcat proprietor 50; And another 10 10s.

We are curious to learn how much of the 600,000 stated by Mr Barry to be the cost of the central station line, which if evidence previously given in Parliament is to be relied on, must be increased to 1,600,000 or 2,000,000, has or will be subscribed by those gentlemen, or by others resident in Dublin. But even some of those gentlemen, acting with Hibernian caution, have accompanied their subscriptions to the expense fund by an emphatic declaration that they are not by doing so to be expected to contribute to the capital – a rather unlucky statement to be brought before a select committee.

Mr Barry gave prominence to the statement, that in 1863 and 1864 Parliamentary committees resolved that the mode of connecting the railways terminating in Dublin should combine a central station, but he omitted to inform his hearers that such opinion was expressed before they heard the reasons given by evidence why a central station should not be permitted – would be an inconvenience and would never pay a shilling dividend; on hearing which they, like sensible gentlemen, were not afraid or ashamed to reverse their decision, given on hearing evidence on one side only, and adopt the other view.

We think we may now safely dismiss the matter from further notice, and we hope we shall not be compelled to revert to it, and that the duties of the committee will be limited to the consideration of the other two bills now about to be brought before them – viz that promoted by the Dublin Port and City Railway Company, already selected by Parliament as the best line, and which connects all the railways which terminate in Dublin without interfering with the city, and which is supported by some of the best of the English railway companies; and that promoted jointly by the Great Southern and Western, and London and North Western Railway Company, a company which Mr Barry considers, and perhaps with good reason, seeks to monopolise the carriage of Irish traffic, by means of which only three of the five lines will be connected. Whatever necessity for the convenience of many even though at the expense of the public, might have existed heretofore for a central station, no longer can be admitted since the introduction of the tramways in that city, which cannot fail to be a success and seal the doom of any central station project.”