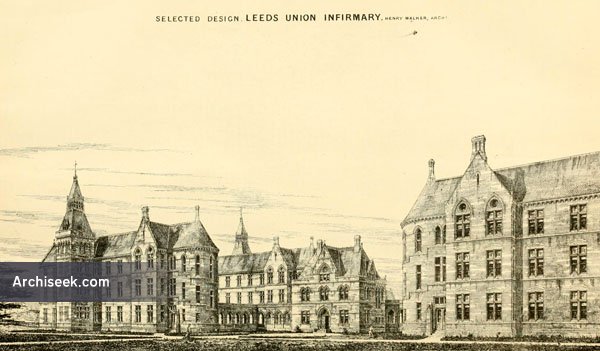 The Infirmary was built in 1874 alongside the Leeds Union Workhouse. In 1915 both workhouse and infirmary were taken over as the East Leeds War Hospital; in 1925 it became known as St. James’s Hospital. The current Glenbow Wing of the hospital sits on the site today.

Published in The Building News: “WE give illustrations of the ground plan and front elevation of the selected design for the Leeds Union Infirmary, sent in competition by Mr. Henry Walker, of Leeds. Special attention appears to have been bestowed by the architect on the matters of ventilation and heating. The design is to consist of four pavilions, with administrative blacks capable of accommodating 400 patients, yet so arranged that other blocks can be added when necessary. The erection of two pavilions only would meet all present wants. We shall give a perspective view of the building in an early number.

The design is Gothic in character, and will therefore harmonise with existing buildings on the estate. The sum per bed at the architect’s disposal has forbidden the introduction of anything for mere architectural effect. 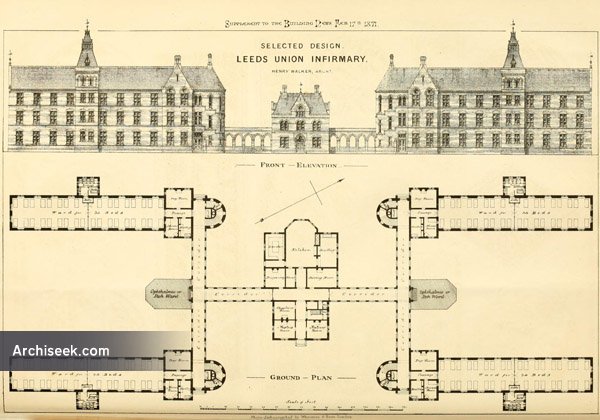 The structure is intended to be built in red brick, with sandstone dressings, the staircases and landings being of Bradford stone. The roofs would be constructed of Baltic red wood, and covered with Welsh slates : and the floors of the wards are intended to be carried on flitched beams, and laid in pitch pine, for polishing, if thought desire-able. The walls and ceilings will probably also be finished with Keene’s cement, and brought to a polish. Throughout the building ordinary sash windows are shown. Smoke flues will be constructed of fire-clay tubes, now coming into general use, and aU air-flues will be formed of common glazed earthenware drain tubes. Jenning’s urinals, lavatories, and water- closets are recommended ; and, for supplying the baths and sculleries with hot water, a Green’s patent heating apparatus. “