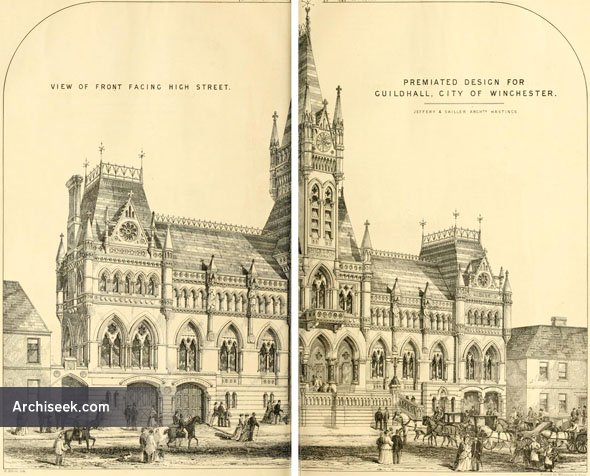 The premiated design for Winchester Town Hall in an architectural competition to design a new town hall, published in 1871.

The foundation stone was laid 22 December 1871. The new building was designed by Jeffery and Skiller in the Gothic Revival style. The design for the central section involved a flight of steps leading up to an arcaded entrance on the first floor, three mullion windows on the second floor with a tall clock tower above flanked by angle pavilions. Statues of local historical figures were erected on the front of the building at second floor level.

An extension to the west of the original building, built to the designs of John Colson with a flint-work frontage, thereby creating a new banqueting facility, was added in 1893. The guildhall, which was the meeting place of the municipal borough of Winchester continued to serve as the local seat of government after the enlarged City of Winchester was formed in 1974.