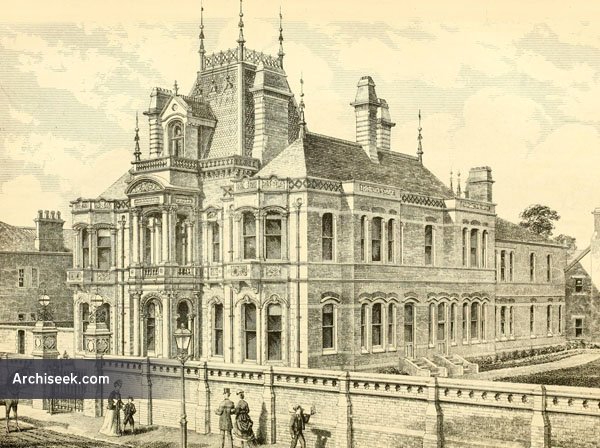 Commissioned by a Major Seel, it cost him £27,000, an enormous sum in those days. Through lack of funds he was unable to complete the furnishings, and never lived in the house, which became known locally as Seel’s Folly. Nikolaus Pevsner described it as “a symmetrical but dissolute Gothic-cum-Italian-cum-French building”. Demolished in 1967

ONE of our illustrations this week represents a noble detached mansion erected at Leamington, bv Mr. E. Welby Pugin, for the private residence of Major Seel. The buildings are in the modern Gothic style, substantially built of Bath stone and Suffolk bricks, and no expense has been spared in completing the whole in its minutest detail in the most elaborate and finished manner. On the ground floor is the entrance hall, an inner vestible facing a grand staircase, l0ft. wide, entirely constructed of stone, beautifully carved, with handsome marble columns supporting the roof; drawing-room, 39ft. by 18ft. ; dining-room, 2Sft. by 20ft.; library, 28ft. by 18ft.; a morning-room, ante-room, study, lavatories, deed-room, plate safe, and in a corridor which is shut off from the reception rooms is a perfect suite of domestic offices. On the first floor is a chapel or picture gallery, a fine billiard-room, thirteen principal bed chambers, three dressing-rooms, bath-room and offices, and seven sleeping apartments for servants over. All fireplaces and chimneys are in marble or stone, and the woodwork in polished pitched pine, entirely dispensing with paint. The house, conservatories, and carriage house are heated by hot water, and rain and hard water is supplied throughout. The grounds are tastefully laid nut, and the stabling yard and outbuildings are judiciously placed in the rear.