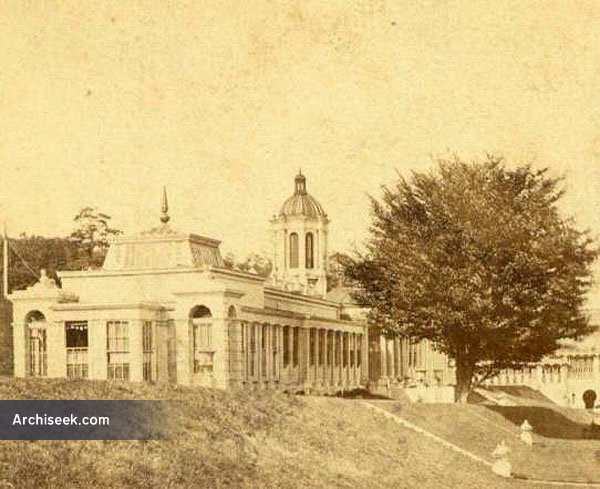 Part of the earlier, sprawling Hydropathic centre started by Dr. Richard Barter, the large Turkish bath building can be seen in the foreground. The Hydropathic buildings are those further up the hillside. The hydro opened in 1843 and remained open until 1952. The first Victorian Turkish Bath was built here in 1856 by Dr Barter and David Urquhart. The technology used by Barter was then improved upon, and became known as Improved Turkish Baths. The Hydro was at its peak from around 1880-1920 and at one stage had around 80 bedrooms, its own farm for provision of fresh food, and a fish hatchery. For recreation, guests had access to tennis courts, reading rooms, billiard roods and even a bowling alley. A golf course was added in 1907. 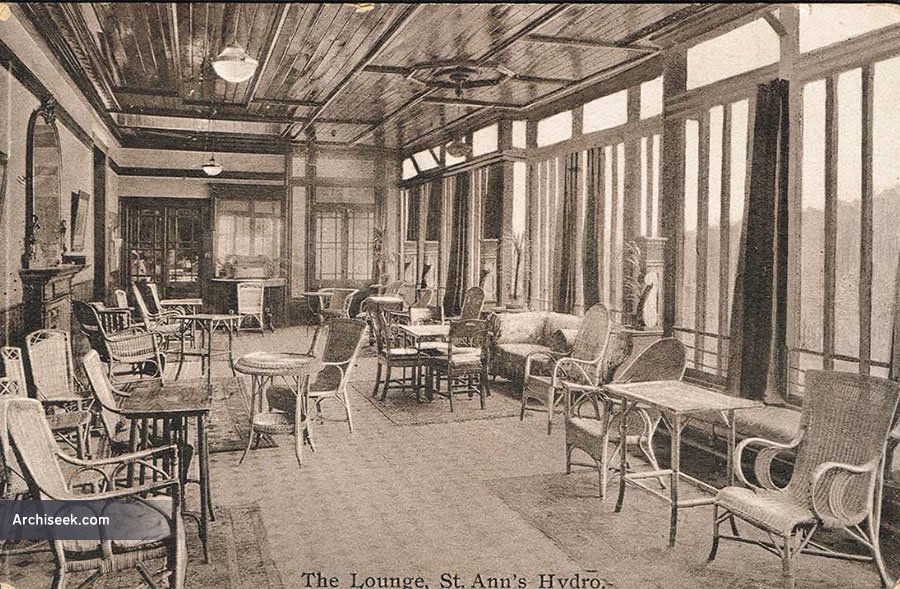 The baths building was described in  Irish Builder, Vol. XII, 1870, p.170: “A NEW Turkish Bath was opened on Wednesday at St. Ann’s Hill, Blarney, The new building is situate upon a terrace below the main building, and for style of architecture and beauty excels anything of the kind ever seen in this country. The baths occupy a space of 180 feet by 36 feet, and consist of two complete sets, one for ladies, and the other for gentlemen. The structure is divided transversely, a cupola surmounting the building upon the outside, at the point of division. The entire building has an exceedingly classical and imposing effect externally and internally, and is built in a substantial and permanent manner. The division walls of the sanatorium have piers of Caen stone carved, and styles panelled in red Cork marble, the capping of the top rails being polished Sicilian marble. The flooring throughout is laid in red marble, also giving a beautiful effect to the building. Upon the gentlemen’s side of the structure the wall dividing the hot room from the cooling chamber is broken by a circular-headed aperture 12 feet by 6 feet filled with a single sheet of plate glass. These noble rooms are decorated in the highest style of architectural ornamentation. Much use has been made of mirrors and stained glass in the construction of the building, which, combined with the rich s tapestry, gives it internally quite an Oriental appearance. In the centre of the cooling room a marble fountain plays into a plunge-bath of large dimensions. Special arrangements have been made in the hot room for its illumination by gas, the chief features of which are the maintenance of the purity of the internal atmosphere, the products of the a combination of the gas-lights passing directly into the external air from the hot rooms by oblong circular-headed stained glass panels. The architectural beauties of this magnificent establishment are due to Mr. R. Barter.”