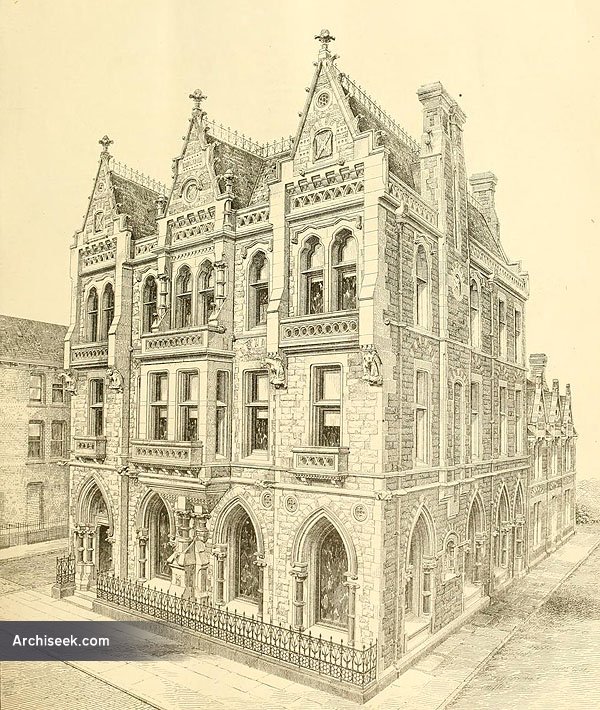 Backhouse’s Bank merged in 1896 with Gurney’s Bank of Norwich and Barclays of London to form what is now Barclays Bank. From The Building News: “THIS building, which his just been completed, from the designs o£ Mr. George Gordon Hoskins, F.R.I.B.A., o£ Darlington, has four frontages, which are entirely of atone, the description of work being termerl pitched blocker walling, of Pensher stone, with Dunhouse stone dressings. The main front faces the High-street. It is divided into three bays, terminating with gables, with carved stone crockets and finials ; within a panel in each of the side gables, which abut upon Norfolk-street and West Sunniside respectively, is carved the shield from the coat of arms of the Backhouse family, the middle gable being furnished with an oriel window, supported by a buttress and red Aberdeen polished granite shafts with carved stone caps. From the side gables occur certain projections of the quoins or angles forming the ends of balconette cills to the second-floor windows, the corbels supporting those projections being represented by grotesque animals, which have been carved from the architect’s design. Other fantastic figures are placed at the angles of the several string-courses. The principal entrance doors and windows on the ground-floor have segmental pointed arches, the mouldings of which consist generally of alternate rounds and deeply-cut hollows, producing a strong effect of light and shade ; these arches are sup- ported by columns of red Aberdeen polished granite, with mid-bands and carved stone caps, the foliage of which is of a conventional character.

The entrance to the bank is from the High-street, by a porch or vestibule at the north-east angle, the floor of which is paved with encaustic tiles, executed by Messrs. Maw & Co , the ceiling being of panelled timber. This vestibule is lighted from the east by a large circular window of geometrical plate tracery, fjUed with stained glass by Messrs. Lavers & Barraud, of London, representing the armorial bearings of the firm. The south wall is furnished with an arcade of segmental pointed arches, supported by columns of polished Cairngall granite, with carved stone caps and cornices. Passing through the swing-doors on the west, we enter the banking room. The size is 34ft. by 28ft. ; but in addition to this the bank proper consists of a second space, 23ft. by lift., for the accommodation of some of the clerks, and serves as an approach to the strong-rooms.

This portion of the room is divided from the main by an arcade of moulded stone arches supported on massive columns of polished red Aberdeen granite, with carved caps. The whole of the woodwork is of wainscot oak, except the panel moulds of the framing and staffs of the architraves, which are of Spanish mahogany. The room is surrounded by a dado 4ft. high. The portion of the flooring appropriated to the public in front of the counter Is laid with the same description and pattern of tiles as those in the vestibule. At the east and west ends of the room are chimney-pieces of black marble, reLIeved with Egyptian green and inlaid with serpentine marbles, and provided with black marble fenders and tiled hearths,_ executed by Messrs. Nelson, of Carlisle. The private office has its entrance from the public portion of the banking-room, the furniture being specially designed by the architect. The portion of the building above the bank proper is arranged as two commodious dwelling-houses, with their entrances on the east and west fronts. These are occupied by two of the clerks. The contractor was Mr. George Gradon, of Durham ; the carving has been executed by Messrs. Farmer & Brindley,^ of London. The works have been in hand a little more than two years.”