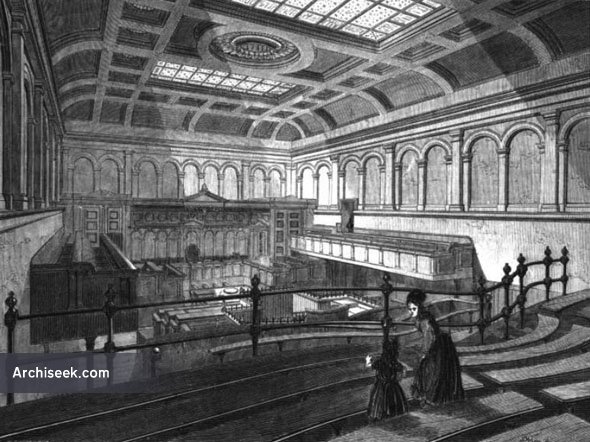 From The Builder, January 22, 1870: Durham Assize Courts have undergone complete revision under the direction of Mr W Crozier the county architect and may be considered new. They appear to have elicited the warm commendation of those who have had to use them. We give a view of the Crown Court, a view in the Central Hall and plans of the various stories specifying the offices and rooms.

Entering the building by one of tho throe conveniences. In front of and below the judge large entrance-doors from a raised terrace on the main front, a vestibule is found, 40 ft. by 11 ft., running right and left. Out of this vestibule are desks and seats for the officials. The witness is placed in the angle formed” by the reporters’ box and the bench, and facing the jury. In access is obtained to gentlemen’s waiting-rooms, front of the court officials is a large table, having and the chief constable’s and county surveyor’s in it a moveable circular disc, so constructed as offices. Passing on through three glazed double doors, a corridor is entered, 40 ft. by 6i ft. wide, running parallel with the vestibule. At the end of this corridor access is gained to the ladies’ waiting-room. After passing across this corridor the central hall is found, one of the main features of the new arrangements. The hall is in the centre of a square formed by the two courts, thegrand jury-room and the magistrates’ meetingroom. Onthesouth sideis the main staircase,leading on the first landing to the grand jary-room, waiting-room for grand jury witnesses, and indictment office. Turning to tho right and left you ascend to a balcony extending round the four sides of the hall, and from this access is obtained to the magistrates’ meeting-room (formerly the grand jnry-room). The hall is 52 ft. by 29 ft., and 30 ft. in height, lighted from the ceiling by three large ceiling-lights, in a deeply-snnk, beam.panelled,

to be raised at pleasure to enable models to be shown and described. Bound the table are the seats for solicitors. Behind the solicitors’ seats are three tiers of sliding seats and desks, each slightly elevated one over the other for the use of the barristers. The second row of these tiers is divided by the interposition of the prisoners’ dock, which is fitted with seats for the gaol officials. The dock has direct access from the male and female prisoners’ waiting-rooms, which are built in the prison yard to tho rear of the Crown Court. A curved passage, which gives its form to the seats, passes round the dock on the court level, giving access from side to side of the court. An entrance is provided on the court level for the governor of the gaol and surrendering prisoners, out on bail, to get into the dock ; steps also ascend to the prosecutors’ and witnesses’ seats, which are behind the passage at the back of the dock. Immediately behind the witnesses’ seats, and divided from the latter by an iron railing similar to the hall balcony railing, are tiers of seats for the accommodation of the public; these extend backward to the north wall, each tier rising 6 in. one over another. The floors of the courts are covered with kamptulioon, to prevent noise.

With reference to ventilation, fresh air is admitted to each court through an air grating under the raised steps in front of the north elevation, and passes along an air course (10 square feet in area) till it reaches the north side of the basement story (which extends under the whole floor of the central hall) ; it is here met by a water amotizer, which constantly gives out (extending over the whole sectional area of the air course) a mist or spray that washes and cools the air and regulates its hygrometrio state, the waste water falling back into a cistern, and being used in the boilers ; the air then passes to a fan, 6 fit. in diameter, which is driven by a small steam engine at a rapid rate, and is then forced either through the cold-air chamber or the hotair chamber, or partly through one and partly through the other, according to the heat required in the courts, and which is regulated in the court as easily as hot and cold water”” one or both””are admitted into a bath. The hotair chamber is completely filled with hot-water pipes, heated from a low-pressure boiler. The air, after passing through one or both of the chambers, as may be necessary, then paasea into a mixing chamber, and is distributed by brick, flag-covered, air conduits to all parts of the courts. The air is extracted by means of large air flaes, constructed in the roof above the ceiling-level, and connected to a shaft 50 ft. in height at the corner of each court; the ventilation is assisted in the shaft by two coils of steam pipes, one at the public gallery, and the other at the ceiling-level; these coils are heated with steam from a steam boiler, the same boiler snpplying power for the engine which drives the fans ; the outer skin of the two boilers gives off the necessary heat for warming the central hall. The cost of the works will be about 5,0001. Mr. 0. Turnbnll has been clerk of the works, and has carried out the mason work, which was principally in alterations, with daily workmen; and the following tradesmen have been contractors for the different departments of the work :”” Joiner and carpenter’s work, G. Gradon, Durham; slater, B. Bule & Bod, Durham; plastering, and cement, and tile flooring, W. B. Wilkinson, Newoastle-on-Tyne; painter and glazier, W. Hodgson, Durham; plumber and gasfittings, James Laidler, Durham; heating and ventilation, Haden & Sons, Trowbridge and. Manchester; furnishing, W. Bobson, Durham.