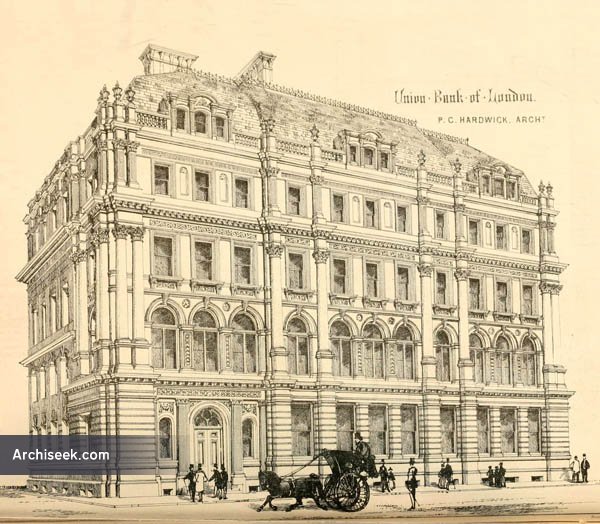 This joint stock bank was established at 8 Moorgate Street, City of London, in 1839 as Union Bank of London with a paid-up capital of £211,500. The head office was moved to Princes Street, City of London, in 1844. In 1887 a new head office building was erected in Princes Street. By 1902 there were 24 branches in London and its suburbs. After a series of mergers, and acquisitions, the bank was eventually subsumed into other banks, and eventually the Royal Bank of Scotland.

From The Building News: “This building, o£ which we give an illustration this week, has recently been erected on one of the finest sites in the City, opposite the Mansion House, and will be a conspicuous object from the proposed new street which will run from the Thames Embankment to Mansion House-street. The facade is as yet incomplete, the leases of the houses on the Princes-street side not having expired. The works were for some time delayed whilst arrangements were pending for the widening of the street; and eventually the building was set back 16ft., that space being given to the public thoroughfare. The foundations had to be made at the unusual depth of 15ft. (in consequence of the site having been that of the ancient river Walbrook), being a little below the old Roman level of the City. In the course of the work a few Roman coins and a very complete portion of a tile pavement were discovered, with timber piles, and other remains. The present frontage on Mansion House-street is 89ft., which will hereafter be considerably extended, and in St. Mildred’s Court the frontage is 70ft. The stone dormer windows break the balustrade, which is backed by a roof noticeable for its pitch, giving a skyline more pleasing than is usually obtained by a hard toe o£ the regulation balustrade, disguising roof and chimneys. The grouping of the windows has- been well arranged to give relief to the facade, and the centre bays have been brought forward to give an irregular line of frontage. The entrance lo Mansion House-street (which has a bold polished red granite architrave) leads to suites of ffices on the first, second, and third floors, the whole of the ground floor being used for the business of the bank, as are the basement and upper floors of the building in St. Mildred’s-court, the entrance to the bank itself being in Princes-street, in the older portion of the building, which was erected by Mr. Philip Hardwick, R.A., as offices for the Great-Western Railway company.

Internally, the centre of the banking office is well lighted and ventilated from a dome 39ft in diameter, intersected by arches springing from eight columns supporting it. Also carried by these is a gallery on the back of the first floor of the old building in Princes-street. The ornamental iron gallery front defines the octagonal form of the dome on plan, four of its sides being longer and four shorter. In the centre of a ring which stops tbe moulded ribs of the dome is a large sun-burner. The floors thoughout are of fireproof construction, this part of the work being done by Mr. Barrett. Messrs Gubitt and Co. are the contractors. The business of the bank has not been. impeded during the progress of the works.”