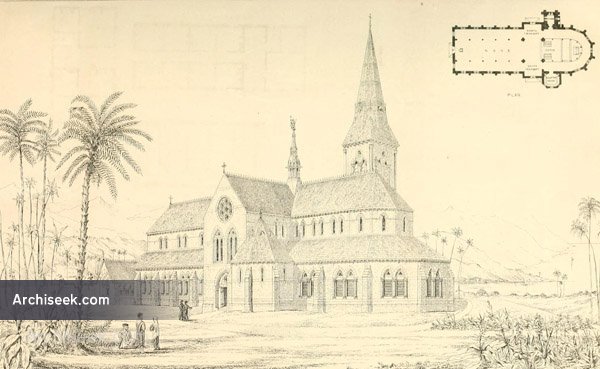 The original ground for the Cathedral of Saint Andrew was given by King Kamehameha IV and Queen Emma. During a trip to England in 1865, Queen Emma (then the Dowager Queen), raised six thousand pounds, and selected architectural plans from the London firm of Carpenter and Slater for a Gothic Cathedral. The plans described a “simple cathedral of modified 12th century French Gothic architecture”, as then favored by the Church of England, and intended to seat 600 to 800 people with spacious chancel, ambulatory and clerestory. Along with plans for the cathedral, Emma also purchased cut limestone arches, windows and pillars which were shipped to the Islands in 1867 as ballast; a second shipment was procured in 1882, as construction of the Cathedral building continued. The thick masonry walls used “beach” stone quarried from West Oahu, plastered to a smooth finish on the interior. Emma was present with her brother-in-law, then King Kamehameha V, to watch the laying of the Cathedral cornerstone in 1867, and the dedication of the Cathedral as a memorial to her late husband. Emma did not live to participate in the first service in the partially completed Chancel & Choir on December 25, 1886. The final two bays of the nave, the narthex and the Great West Window were not completed until 1958 – 91 years of work. The spire in the illustration was never constructed.

From The Building News: “THE proposed new cathedral at Honolulu, the capital of the Hawaiin Islands, is to be erected as a memorial to the late King Kamehama, and, for the purpose of raising the necessary funds for this object his widowed queen visited this country. He had taken very great interest in the growth of religion in his country, and to his exertions are due in a great measure the foundation of the See of Honolulu. The bishop was consecrated by the late Archbishop of Canterbury in December, 186l.

The plan of the church consists of a nave six bays in length and •24£t. wide, with north and south aisles, each lift. 6in. in width ; north and south transepts, Sift, wide ; and choir, with a five- sided apse with processional path continued round it. The length of the choir, from the first step to the outside of the apse columns, is 45ft. The tower stands in the angle between the north transept and the north choir aisle, and the octagonal baptistery is placed in a corresponding situation on the south side. There are two rows of six stalls each on each side of the choir, the dean and precentor’s stalls being respectively at the western- most ends of the south and north upper stalls, and the chancellor’s and treasurer’s stalls at the eastern ends of the same rows of stalls. The bishop’s throne is on the south side, eastward of the stalls^ (omitted on the accompanying plan by an oversight). The altar is raised seven steps above the nave level, and will have over it a lofty baldaguin of metal work. A low iron screen divides the choir and nave, and it is also intended to place metal grilles in all the arches of the choir and apse, with gates opening into the processional path. Thu pulpit will be erected against the northeastern pillar of the crossing, and the nave and transepts will be devoted to the congregation, using the aisles as passages. The font will stand at the western end of the nave, and in the centre of it.

It has been sought to convey the cathedral idea more by the general plan and arrangement of the building than by grandeur and magnitude of design, for to such a comparatively small place as Honolulu the English type would not be appropriate, even had it been possible, through the amount of funds available, to have contemplated a building on that scale. With regard to the building materials, there were only two courses to be adopted — either to send out the mason’s work from England, or to build the whole of rough stone plastered inside and outside. It has been resolved to adopt the former course, and the columns, arch-mouldings, strings, cornices, windows, doors, &c., will therefore be sent out. The whole of the is- land is volcanic, and there is no freestone of any kind. For ordinary walling, black basalt and reef- stone (cut from the reefs by the native prisoners) is used, quarried to any size, and 8iu. thick. The natives thoroughly understand and do this sort of work well, but skilled mason’s labour is very expensive, about six dollars a day being asked. Bricks, if used, have to be brought from California ; the lime is good and cheap, and there is plenty of good Oregon timber at reasonable rates, and also American pine. Shingles are used for roof coverings.

The portion of the cathedral which it is now in contemplation to erect is the choir and processional path, and the tower. The choir is of three bays in length, with an apse^of five arches ; the columns are cylindrical, with sculptured capitals ; the arch-mouldings are in two orders. The clerestory has in each bay two lancet windows (except in the apse, where there is one window in each bay), with moulded internal arches, resting on shafts with carved capitals ; on a line with the springing of these windows rise the arched principals of the roof, resting on wall shafts, which are continued down to the caps of the arcade. Under the clerestory runs a string of ornamental terra-cotta, and of this material will be the labels of the arches. The aisle windows arc coupled and have arch-mouldings and shafts inside and outside ; they will have movable glazed sashes and wooden inside Venetian blinds. The tower is divided into four stages in its height, and has a circular stair turret on its east face. The west, north, and east sides of the second stage have a series of rich sculptured niches, with figures, the principal ones being — our Lord, the first Bishop of Honolulu, and the late King. The third stage is plain, and the fourth or belfry stage has on each side a deeply-recessed and moulded two-light traceried window. A timber and shingle spire will eventually be added to the tower. The nave .and transepts will correspond in their general design with the choir. The four arches of the crossing are of lofty and massive proportions, and the walls above them, under the arched principals of the roofs are pierced with three open arches, resting on slender shafts. Over the crossing will be a rich fieche of timber and lead, surmounted by a figure of St. Michael. It is proposed to use Doulting stone for the masonry, together with Ketton and Bath stone for the ashlar internal lining. The external walls will be of basalt laid in regular courses, and not plastered. Terracotta will also be used for strings, plinths, &o. The tile flooring and all fittings will be sent out from England. The font, a gift of Lady Franklin, has already arrived at Honolulu. Separate funds are also being raised for the bells and stained glass.

The completion of the whole building is of course a matter of time, and depends on the raising of the requisite funds, but it is hoped that the actual erection of the choir will be begun at once, the plans for the foundations haviug been already sent out to the bishop by the architects to the cathedral, Mr. W. Slater and Mr. R. Herbert Carpenter.”