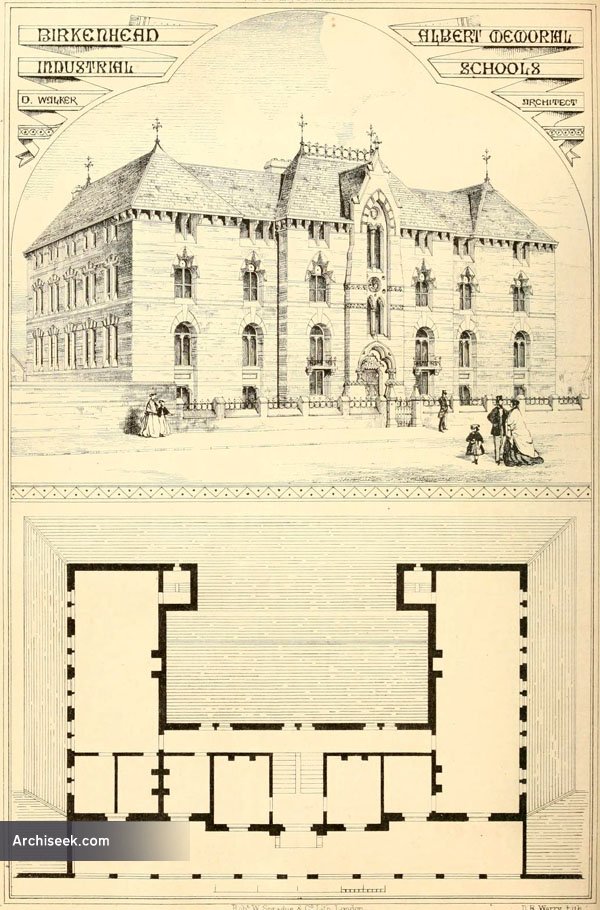 In 1864 Sir William Jackson donated land for the building of the Birkenhead industrial school. The school was to stand in the centre of the poorest area of Birkenhead – on Corporation Road in the heart of Dockland. In addition to being a memorial to the late Prince Consort, the school was to provide education and care for 120 boys and 60 girls from poor homes in the locality. The Albert Memorial School opened in 1865 entirely at Jackson”s expense. One of the prime aims of England’s industrial schools was to provide a decent education outside of the workhouse and of correctional establishments and many boys were sent there by the magistrates. It is said that, by 1870, some 423 children had been rescued by the school from degradation and a life of crime. Originally a mixed school, in 1899 became a boys only school. Closed in 1924.

From The Building News: “ON another page is an illustration, with plan, of the Birkenhead Albert Memorial Industrial Schools, presented to the town by Mr. Wm. Jackson, M.P. The building is situated in Corporation-road North, Birkenhead. The design erected was selected from a number sent in competition, and in plan resembles the letter £, having a frontage to Corporation road lOSft. in lengtb, by a depth of 60ft. The principal entrance, and the superintendent’s residence, board-room and offices, &c., occupy the front centre, whilst the right side of the building is devoted to boys and the left to girls, proper classification of sexes being strictly maintained throughout. On either side of the entrance-hall is the board-room and office, and descending a few steps on to the basement floor the dining hall is reached, an apartment 40ft. by 50ft., having an open timber roof and lighted therefrom by clerestory lights ; direct communication is obtained with the kitchen and other offices from this apartment, &a well as separate entrances for both sexes from the schoolrooms and play grounds. The workrooms for industrial pursuits are also arranged on this floor, immediately under the schoolroom on the right, and are properly heated, lighted, and ventilated ; whilst the girls have kitchens, laundry, &c., on the opposite side, having lavatories, bath-rooms, &c., attached to each, with a large plunge bath for the common use of both. Stone staircases are provided for each wing from this floor the full height of the building, the superintendent’s and matron’s apartments being approached by the principal stair from the front. The ground floor is approached by a wide, well lighted corridor from the entrance hall right and left, leading to the bovs’ schoolroom 57ft. long by 20ft. wide, and girls’ schoolroom 43ft by 20ft. of proportionate height, amply lighted, and perfectly ventilated, with class and sewing rooms attached. The entresol floor, over office and board-room, contains the sitting and bedrooms of the superintendent and matron, which being equidistant from all parts of the building perfect supervision is obtained throughout. The dormitories are arranged on the first-floor wings, ranges of separate beds being provided on each side, with a wide avenue down the centre, the teachers having bedrooms overlooking the whole, bath-rooms and other conveniences being attached. The second floor has dormitories the same size aa the floor below, in addition to which it is provided with isolated sick wards, store rooms, etc, and all requisite conveniences. Large play-grounds are attached to the schools, and a covered playshed is provided round three sides of the building leading direct to the out-offices, bakehouse, &c. The building externally has a bold and commanding appearance, indicative of the purpose it fulfills, whilst its deep reveals and well broken skyline give it a picturesque appearance ; the material used is local brick interspersed with bands of black, the window arches having bricks of three colours, and roofs slated in parti-coloured slating, The style of the building, for want of a mure defined term, may be called ” Victorian,” being! free adaptation of brick to modern requirement!, and is dependent for its effect rather upon breadth of treatment than the elaboration of parts. The principal entrance door is deeply recessed and richly carved and moulded, supported upon dwarf columns of polished black limestone — the tymptanum of this door contains a relievo specially designed by the architect, the subject of which being Charity interceding with Education for the improvement of the Ragged Poor, the idea of which has been well carried out by the late Mr. Sterling, sculptor, who also executed the medallion bust. Internally the whole of the walls of the school, rooms, dormitories, and offices are finished it brick, painted a warm tint, all the corridors being tiled. In the plan and arrangement of the building no effort has been spared to make it on* of the most perfect of its class in the kingdom The entire cost of the building, with the furnishing, was about £6,000, the whole of which was defrayed by Mr. Wm. Jackson, M.P., as a gift l« the town, who likewise gave the site. The works have been executed in a very satisfactory manner by Mr. T. W. Neill, contractor, from the excellent designs and under the superintendence of Mr. David Walker, of Birkenhead, and Lord-street, Liverpool.