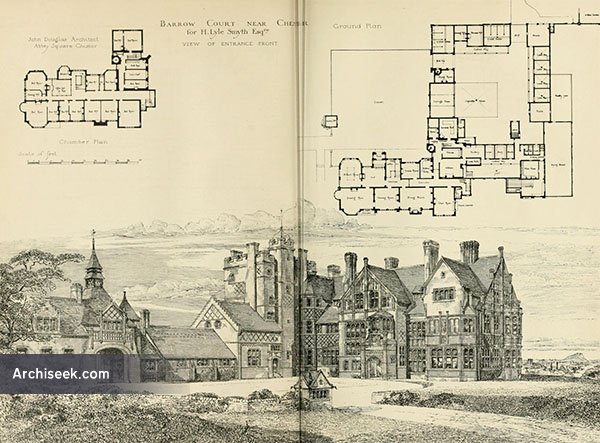 This was one of Douglas’ largest country houses, built for the grain merchant, Hugh Lyle Smyth. It has been demolished. Also known as Barrowmore.

“Barrow-court is pleasantly situated on an elevated site about three miles from Chester. From the top of the tower a magnificent and extensive view of the surrounding country is obtained, taking in on one tide a great part of the Wirral peninsula, and the river Mersey, with the Lancashire coast on the other side, and on others, the Moel-Fammaw range of Welsh mountains, Beeton Castle, and the Peckforton hills, Halton Castle, &c. The plans and view will explain the style and character of the buildings, which are built of red brick, the roofs being covered with green Cumberland slates of small sizes. A feature in the house is the extensive use of special made bricks and terra-cotta for the windows and all the external dressings ; these, together with the face bricks, have all been supplied from the works of Mr. Henry Bowers, of Ruabon. The interior joinery to best part of the house is being carried out in oak. The contractor is Mr. Richard Beckett, of Hartford, and Mr. Allan Lloyd has acted as clerk of works. The plans have been prepared, and the work is being carried out under the superintendence of, Mr. Douglas, of Chester.” Published in The Building News, October 14 1881.