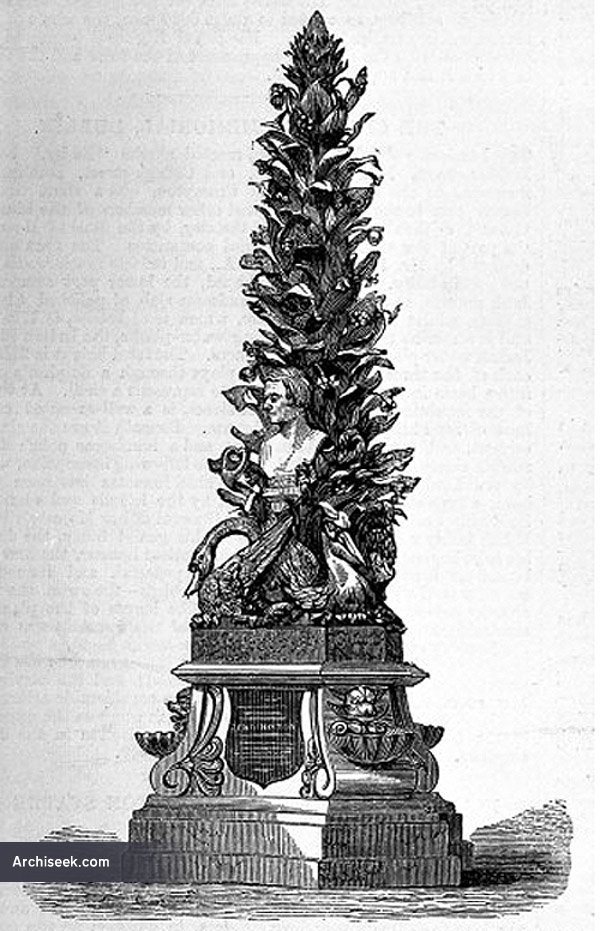 Sir Philip Crampton was Surgeon-General to the British Army. He was always interested in zoological science and played an active part in founding the Royal Zoological Society of Ireland and was many times its president. Situated at the junction of College St. with Pearse St. and D’Olier Streets. This bizarre memorial, which was made up of a stone base with three drinking fountains and what looks like the top of a pineapple, slowly rusted and fell apart. Removed in 1959. The site is now taken by the distinctly under-whelming Long Stone sculpture.

Described in The Building News: “An elegant and massive drinking-fountain has been erected at Dublin, in memory of the late Sir Philip Crampton. This fountain was designed by Mr. Joseph Kirk, R.H.A. It is tripod-shaped, the lower part composed of Irish granite, above which is a handsome slab of polished Aberdeen granite, whilst the superstructure, which is of bronze, is 1 7 ft, high, and is a marine trophy, representing water-plants ; the Indian lily, the Indian water-plant, abacus, and others. The total height is 25 ft. At each of the three angles, the water plays through a dolphin’s mouth, into a basin in the Irish granite, cut to represent a shell. At the side of the fountain, facing Brunswick Street, is a well-executed colossal bust of Sir Philip Crampton, in bronze. Beneath it are the club and serpent, emblematic of Eucalyptus, and a handsome polished black marble shield, bearing, in gilt letters, the inscription. Around the pedestal, and immediately superior to the dolphins’ heads, are three birds — the swan, the heron, and the pelican executed in bronze. The leaves of the plants are admirably finished. The bronze portion of the fountain was cast in the foundry of Mr. Potter of Molton Street, London ; the Irish granite was carved in the Golden Quarries Blessington — where it was obtained — by Sir. Bryan. The entire cost of the fountain is £300.”