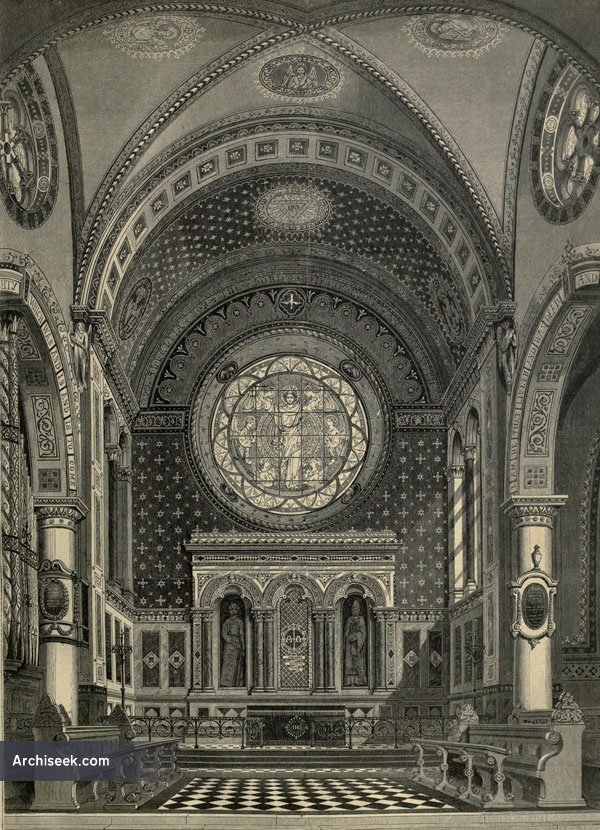 St Michael, Cornhill was the site ofa medieval parish church, which was lost in the Great Fire of London, and replaced by the present building, traditionally attributed to Sir Christopher Wren. The upper parts of the tower are by Nicholas Hawksmoor. The church was embellished by Sir George Gilbert Scott and Herbert Williams in the nineteenth century. In the late 1850s, the Drapers Compan funded a lavish scheme of embellishment, and asked George Gilbert Scott to carry out the work. The church escaped serious damage in the Second World War and was designated a Grade I listed building on 4 January 1950. In 1960 the Victorian polychrome paintwork was replaced with a more restrained colour scheme of blue, gold and white.

From The Building News, January 11, 1861; “IN our present Number, page 31, we give an illustration of St. Michael’s church, Cornhill, by an examination of which our readers will be enabled to form a correct general idea of the effect produced by the internal decorations that have been so successfully carried out under the direction of Mr. G. Gilbert Scott.

We have given detailed reports of the progress of the works at page 182 m our Volume for 1860, and it is, therefore, only necessary for us to append a brief statement as to the present state of the works.

In describing the decorations of the church, we may divide them under four heads: — 1st. Those in marble, alabaster, and stone. 2nd. The coloring and gilding of the plain surfaces of the groined roof, &c. 3rd. The carvings in wood; and 4th. The stained-glass windows.

The first of these have all been admirably executed by Mr. Birnie Phillip, architectural sculptor, and comprise the traceried windows, the figures supporting the main supports of the roof in stone, the fine heads of the Evangelists in alto-relievo, the elaborate reredos, the panelled walls of the chancel in alabaster, and the chequered floor of the same in black and white marble.

The colored decorations of the plain surfaces, as applied to the groined roof, &c., are by Messrs. George Trollope and Son, Parliament-street.

The carved woodwork is all executed in oak of beautiful color and texture, effectively rendered by the veteran Rogers, who is one of the most successful imitators of the renowned Grinling Gibbons. Here, however, Mr. Rogers has worked in a different style to that of the great protege of Sir Christopher Wren, and equally successful. The carvings by Mr. Rogers in the church comprise the upper portion of the hexagonal- shaped pulpit, the whole of the bench ends, the Royal pew, &c.

The stained-glass windows are by Messrs. Clayton and Bell ; the works in brass, which comprise the altar and pulpit rails, gas standards, together with the pulpit lights and brackets, are by Potter, of South Molton-street, the whole of which are of mast excellent workmanship, from designs expressly furnished by the architect.

In reference to the works by Mr. Phillip, the sculptor, we may remark that the reredos is a highly effective production, and is composed of various kinds of marble, granite, and alabaster. It is in three compartments, divided from each other by coupled shafts of Devonshire granite, red in color and highly polished. The central recess or compartment is the symbolic representation of Jehovah ; in each of the others a full-length figure of Moses and Aaron, painted by Stralker, an artist of eminence, who was what is termed sergeant-painter to Charles IL The reredos is surmounted by an appropriate cornice, and over the centre recess is a head of the Saviour, cut in alabaster, and on each side heads of the Apostles.

The roofs both of the nave and aisles were originally plain groined vaults, and their structural formations have not been disturbed, but now their general surfaces have been tinted a quiet grey color, relieved by parti-colored ribs, formed at the intersections of the vaults. Longitudinally, the nave and aisles are in four bays, the soffits of the principal transverse divisions being enriched with guilloche ornaments in bold relief, on red, and blue grounds, the bands of the guilloches being a warm cream-color.

The compartment of the roof of the nave, at the chancel end, is rendered more ornamentally expressive by having the diagonal ribs of its vaulting more elaborately painted, and its spandrels having in their centre medallion subjects, embodying representations of the “Choir of Angels”. The ceiling of the chancel has an azure blue ground, studded with golden stars, large and small intermingled, and heads emblematic of the archangels.

We regret that the crowded state of our pages will not admit of a more lengthened description of the carvings in wood by Mr. Rogers. The chief of them is, of course, the pulpit; but we may add that the whole display a considerable amount of talent, as well as Biblical research and vane^Ri there being no two subjects alike in the embellishments of the bench ends and although partaking of a Greek character in reference to tho foliage that surrounds the subjects, the whole are well brought out and carefully manipulated. The subjects represented, as a general rule, are symbolical, and amongst them we distinguished ” The Star of Bethlehem,” ” The Winged Hour-glass,” ” The Brazen Serpent in the Wilderness,” ” Thv Cup and Chalice,” ” Charity,” with groups of pomegranates, lilies, wheat, &c. To give an idea of the diversity of design displayed in the wood- carving, we may state that there are, in all, ninety-four standards or benchends distributed over the whole area of the church, all carved is solid oak.

The pulpit, as we have already observed, is hexagonal in plan, and re«ts on a dwarf pillar of Devonshire granite, on a Portland stone base. The
panels forming each side of the hexagon have diaper patterns on them, tour of which are relieved by having symbolic heads of the four Evangelists in their centres,carved in roundels. On the angles of the pulpit there are twisted shafts, in the manner of Pietro Cavalini, who executed the shrine for Strawberry-hill, the seat of Horace Walpole.

The low chancel-gates have sixteen panels, carved in subjects one-half of which are taken from the Old and the other from the New Testament.

The royal pew is highly embellished, having in the centre a double shield, surmounted by the crown, V. R., and the usual motto “Dieu et mon Droit,” together with the monogram of Victoria, ingeniously disposed in the form of a Greek cross, the letters being carved with more than usual sharpness and projection. This monogram is encompassed by the rose, thistle, and shamrock, as the national emblems J and the whole embodies an historic and antiquarian interest, having been suggested by that in the Charlemagne Bible of the ninth century, now to be seen in the British Museum.

What are termed the Diocesan, Corporation, and the pew of the Worshipful Company of Drapers, are also elaborately decorated. On the front of the bench end of the latter is a double enriched shield, with the motto and date of the company, terminated by the triple crown issuing from the clouds with rays of light. On the inside is a triple branch of lilies, as an emblem of the Virgin, the patroness of the company, and below is carved the shield of Fitzwillan, who was the first Lord Mayor of London, and served twenty-four years, during the reigns of Richard I. and King John, and who was a member of the Drapers’ Company.

As regards the stained glass windows of the church, it is probable that they comprise one of the best continuous brief histories of some «{ the principal incidents in the life of the Saviour that we have in England. Beginning at the western end, on the southern side of the church, the first couplet window, reading eastward (No. 1), is designed to illustrate the advent of our Lord, and includes the Annunciation, the Nativity, the Magi before Herod, and the Journey to Bethlehem. In the canopies ovar the principal subjects are represented busts of the prophets who foretold most clearly the coming of the Messiah ; and in each of the circular openings of the tympanums of the windows are portrayed angels singing the ” Gloria in Excelsis.” The stone tracery of these windows, five in number, are all uniform in design, and the general arrangements of the subjects are similar. On No. 2 windows is represented the Baptism of Christ, and the events connected with it. No. 3 may be styled the mission or teaching window, on which is displayed the ” Prodigal Son,” the ” Good Samaritan,” and the ” Saviour on the Mount.” On the fourth is shown the Passion, including ” Judas receiving the 30 pieces of silver,” and ” Christ in the Garden of Gethsemane,” with the disciples asleep, &c. The fifth window embodies the Resurrection, which event appears to be conveyed by inference rather than actual representation, resulting, we presume, from technical difficulties, in consequence of which the angels announcing the Resurrection to the three Maries have been chosen to form the realization of this difficult subject. On the western window, which is about 17 feet in height, a vigorous picture of the Crucifixion is shown, and the large circular one, 17 feet in diameter, over the reredos, contains a representation of the Ascension, the figure of our Lord being surrounded by a chorus of adoring angels.

Previous to concluding our notice, we should not omit to name that at the bottom of the western window there is a curious production by Gibbons, which has been renovated and gilded. It is a large work cut in wood and represents a Pelican feeding her young, and is executed with an extraordinary amount of vigor. Opposite to this, standing on the floor, is another relic of the church, which is a fine marble font, that was presented in 1672 by Jacobus Paul.

The organ is placed in a recess at the eastern end of nave, on its northern side near the chancel, and is a fine instrument, built by Mr. Robson, of St. Martin’s-lane. It contains about 4,000 pipes, with all the new improvements. The original organ of the church was made by Runatus Harris, who was a contemporary of the noted Smitz.

Mr. John Willson, builder. Great Suffolk-street, Borough, was the general contractor for the plainer description of the works in stone, &C., and the whole, from the most simple to the most artistic, in all their varieties, have been carried out in the most creditable manner.