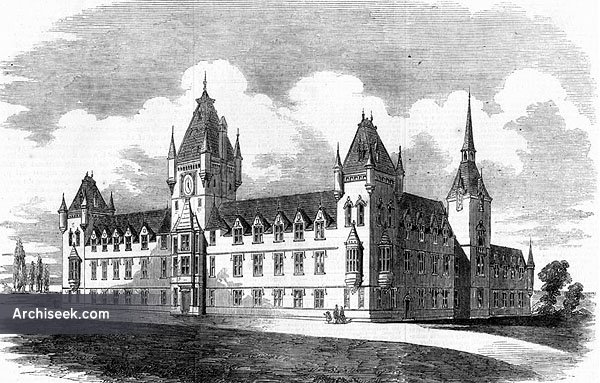 Funded by Prince Albert’s Royal Patriotic Fund, the building was intended for the ‘Education and Training of three hundred Orphan Daughters of Soldiers, Seamen and Marines who perished in the Russian War, and for those who hereafter may require like succour’

Constructed of yellow brick with Yorkshire stone dressings. It consists of three storeys arranged around two courtyards separated by a central main hall. There is an additional single-storey court on the east side. The roof is steeply pitched with slate. The metal-framed windows are mullioned and transomed. The style is a combination of Scottish baronial, Jacobean and French. There are five major towers (three at the front) with pyramidal rooves, and many smaller corner turrets. The central tower at the front has a projecting frontispiece three storeys high; above it is a statue of St George and the Dragon in a niche. Grade II* Listed.