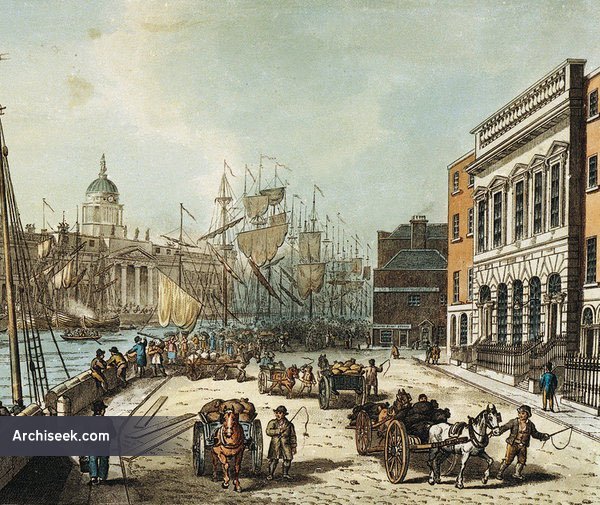 The Corn Exchange Building designed by George Halpin in 1815 was approved by the Wide Streets Commissioners in 1816 with work commencing soon afterwards. Its granite facade still remains on Burgh Quay. Shipping came as far upstream as Burgh Quay until 1879 when Butt Bridge was constructed. Many of the buildings on Burgh Quay including No.8 still retain remnants of the shopfronts designed for the Wide Streets commissioners.

Described by Lewis in 1837, “The Corn Exchange was built by merchants who were incorporated in 1815, under the designation of the ” Corn Exchange Buildings’ Company,” with leave to augment their capital to £15,000; the business is managed by a committee of 15 directors. The building, which is two stories high, has a neat front of mountain granite towards Burgh Quay; the interior contains a hall, 130 feet long, separated longitudinally from walks on each side by a range of cast iron pillars supporting a cornice, which is continued round the inner hall and surmounted by an attic perforated with circular windows; the hall is furnished with tables for displaying samples of grain, and in the front of the building is a large room on the upper story for public dinners or meetings of societies, by the rent of which and of the tables the interest of the capital, estimated at £25,000, is paid.”