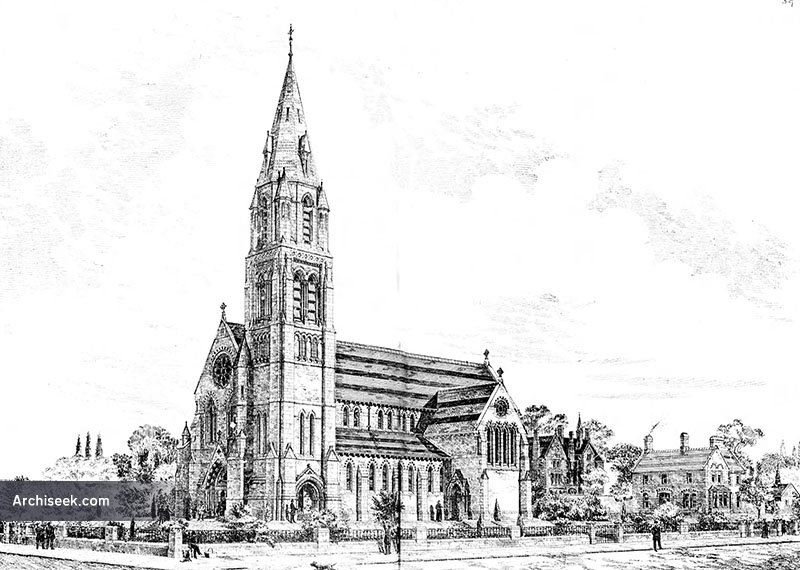 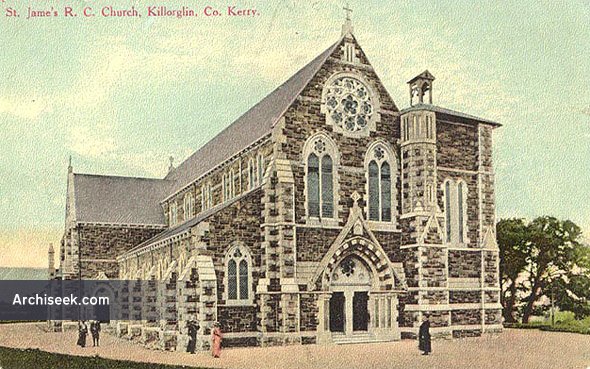 Constructed after an architectural competition to replace an earlier church of J.J. McCarthy from 1860. The earlier church was a mixture of Early English & Decorated Gothic. As with the earlier church, the spire was never completed. The interior has a still largely intact decorative iapse and altar.

Doolin described the design in his competition submission – “In the preparation of the accompanying designs my object has been, first of all, to fulfil your stated requirements in the simplest and most straightforward manner, as the only means by which the requisite economy can be attained ; and, in the style and composition, to adhere to such forms as would make the buildings thoroughly appropriate and unmistakably expressive of their respective purposes.

The English Gothic of the thirteenth century, as exhibited in some of the great collegiate churches—the most perfect development of the Pointed architecture in its severest simplicity—has been adopted as the style, with such legitimate introduction of foreign and modern elements as were suggested by practical considerations. The site is truly a noble one, and worthy of an imposing group of buildings. I have thoroughly studied its advantages, which have greatly influenced the general dispositions of plan and arrangement.

The new church is placed almost at right angles with the old—as it were running through the middle of it—and nearly parallel to the new road. The steeple, commanding the view from the valley on either side below, should be the most conspicuous object in the landscape for miles around, well backed-up and reinforced, as it will be, by the masses of the transepts and chapels. The entrances are placed in the same direction as at present. The house will stand near the vestry, but remote enough to have a fair space for garden and grounds; and near the railway will be the offices.

The convent is placed at the rere, and will form a background to the church and house. It may have a separate entrance from either road. It will be noted that all the buildings are disposed of in the freehold portion of the site. I have not attempted to avail myself of the accommodation land, beyond the assumption that it will serve for gardens, &c. There is still abundant space on the site for a female school, which I am aware is within the range of your projects. I assume that the boys’ school will ultimately be removed from its present position.

The general view of church and the elevations will sufficiently explain the exterior. I claim for the design generally, that it is as simple as can be, consistently with any sort of dignified treatment, or in comparison with the many beautiful churches of which the diocese may well be proud. Throughout, I have sought to gain effect by well-studied proportions and well-balanced grouping of masses, rather than by the elaboration of fussy details. The west front, however, is rather more pretentious than the rest of the work: I could not lose sight of the magnificent view from the bridge; neither could I forget that this front alone will be well seen from the town.

The upper stages of the tower are rather ambitious. I must admit that I did not trouble myself about cost at this point, being outside the limits of the conditions. Still the steeple, as a whole, is not extravagant, while I am confident it will be effective.

The south elevation is so plain as to require no explanation. My motive for keeping the transepts subordinate to the nave is to give scale to the latter. A high transept takes from the appearance of length, the most important factor in a successful exterior; for the same reason I give no external break in the ridge showing the chancel, my desire being to have a perfectly unbroken sky-line at the main ridge. I have adopted the square chancel instead of the apse, and this after grave consideration. I am certain that if there ever was a site which demanded a bold treatment of a chancel it is this. The chapels, transepts, and vestry will form a picturesque group, plainly indicating the internal arrangement.”