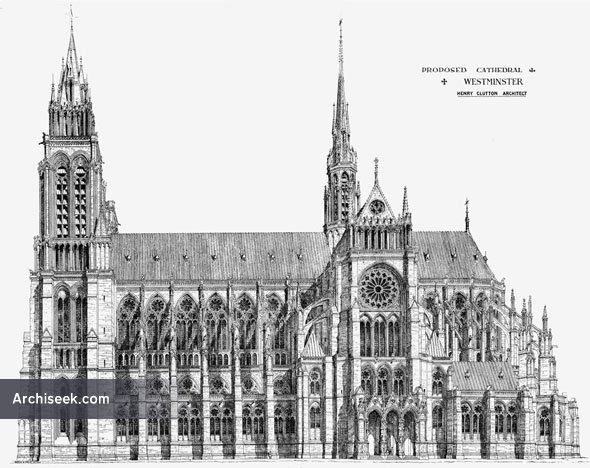 Proposal for a new Roman Catholic cathedral for Westminster. A cathedral was eventually constructed to the design of John F. Bentley. Designs published in The Building News, October 22nd 1875.

Henry Clutton had been contacted by his cousin Cardinal Manning as far back as 1867 to prepare drawings for a future cathedral and these were sufficiently advanced by 1868 for the cardinal to take them to Rome for the approval of Pope Pius DC. By 1875 the plans were published in the Building News, receiving a favourable review. According to The Catholic Herald: “It was felt that Clutton’s cathedral “bore a striking resemblance to that of the Cathedral at Cologne both in the general proportions and length”. It was estimated that this design would be costly and take as long as a century to complete The first portion of the nave would be built up to triforium height and roofed over. The cost of this alone would have been in the region of 80,000, and it became clear to Cardinal Manning that the enterprise could not be undertaken without substantial funding guarantees. He had got himself into an awkward situation by appointing a cousin without due consultation and for allowing the plans to reach such an advanced stage.”

A benefactor came forward and offered to underwrite the costs of a new cathedral but required to be able to select the architect himself. The Cardinal agreed, fired his cousin, whom after six years of effort, must have been a little aggrieved, and the project went to his former articled student Bentley.