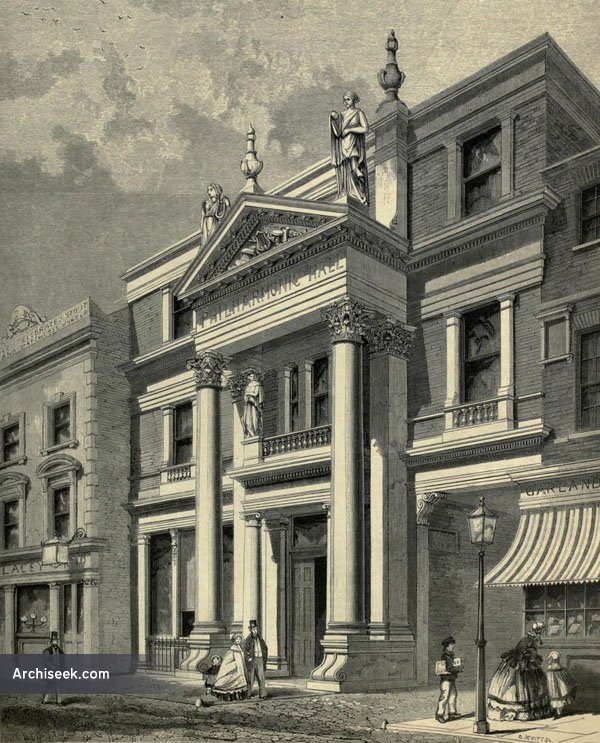 William Finch Hill was a British theatre and music hall architect of the Victorian era. Between 1856–70, he worked with his partner Edward Lewis Paraire, on many music halls and theatres, including Weston’s Music Hall, the Islington Philharmonic, the Oxford Music Hall, the Royal Cambridge Shoreditch, and the Britannia Theatre in Hoxton. Oddly the partnership was based in separate houses in the same street, and on its dissolution Paraire returned to designing banks, churches and public houses.

From The Building News, September 21 1860: “THE building now in course of erection near the Islington turnpike- gate, and of which we give a view in our present Number, is another example of the desire evinced by the public for musical entertainments. The present building is to be devoted to amusements similar to those now offered at Weston’s, Green’s, and other West-end music-halls. The entrance, 14 feet wide, leads to the hall, which is 43 feet wide and 96 feet long, surrounded by a gallery or balcony 9 feet wide, access to which is obtained by a large staircase. We may now state that the entrances and staircases are constructed fire-proof on a principle already adopted by the architects in their former buildings of this kind. At the further end of the hall is the orchestra, which is semicircular in plan, and on other side of it are private boxes. The architectural decorations consist of Corinthian and Ionic columns, the entablature is carried round the hall and over projecting blocks, supported on caryatides between each bay.

The ceiling is divided into panels by projecting beams of an ornamental character. The corridors which are of an unusually large size, are to be used as promenades and supper rooms. Every convenience appears to have been carefully studied for the comfort of visitors. Our illustration represents that portion of the building facing the High-street, Islington ; it is devoted to the entrance and manager’s residence. The whole will be finished in Portland cement.

The building is being carried out from the designs of Messrs. Finch Hill, and Faraire, by Messrs. Hollands and Hannan, the contractors.”