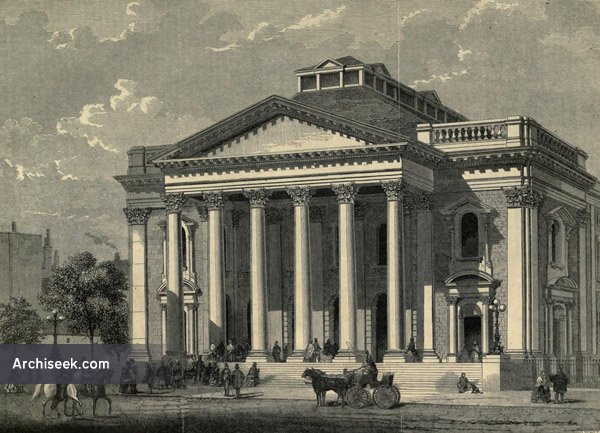 A Baptist Tabernacle built by the renowned 19th century preacher Charles Haddon Spurgeon. The original building was burned down in 1898, leaving just the front portico and basement intact, before the rebuilt church was destroyed again in 1941 during the German bombing of London in World War II. Once again, the portico and basement survived and in 1957, the Tabernacle was rebuilt to a new but much smaller design accommodating surviving original features.

The Building News, “Ourpage 969 in our present Number we give an illustration in perspective of the important building, as indicated above, which, as most of our metropolitan readers are aware, has been er«:ted in tlie vicinity of tlie well-known Elephant and Castle Tavern, that forms a starting point for omnibuses on the southern side of the Thames, to most parts of the metropolLs.

On a former occasion in the Building News, No. 14, April of the present year, we gave a detailed account of the structure, indicating its constructive features, general dimensions, and other particulars, and have now only to add further information as to its interior, which is now in an advanced state of finish, presuming that our illustration will convey to our readers a much better idea of the external characteristics of the edifice than any written description (how- ever elaborate) can accomplish.

The plan of the interior of the chapel is exceedingly simple, it being a rectangle, measuring 174 feet by 85 feet, exclusive of the entrance portico, shown in our illustration. It is alcoved at each end, and circular lines predominate, as we conceive to aid the acoustic properties of the interior, for all square angles appear very judiciously to have been avoided ; and as an experiment in this respect, we may state that no plaster work is employed on the walls, which are throughout lined with ” match boarding,” wood, of course, being considered as an conductor of sound”

The decorated details of the interior arc exceedingly simple, the faces of the alcoves at each end, to which we have adverted, are divided by ribs in plaster work, the faces of which are embellished with moulded work and guilloche ornaments, and each of the sides between them is in five compartments, separated from each other in a similar manner.

The ceiling is supported by series of sixteen cast-iron shafts, which have enriched capitals, from which spring semicircular-headed arches, the soffits of which are enriched with guilloche ornaments to correspond with the ribs already named. The chapel is admirably lighted on both of its sides by sixteen square-headed windows on the ground-floor level, and the same number with circular heads above them, in addition to which there are louvre-lights in the roof.

In our former notice, to which we have alluded, we stated that, contrary to ordinary arrangements, the pulpit will he placed on what may be termed a tribune, which is projected ’29 feet from the western end wall. In the front of this tribune the baptistery is arranged, with the pulpit at the rear, and such is the improvement effected by the peculiar position of the latter, that it is confidently calculated that there will be no more than 50 of the congregation who will not be enabled both to see and hear the preacher, not only on the ground floor, but also in the two tiers of galleries that are in connexion with both the side walls and ends of the building.

To aid both seeing and hearing also the ground floor is planned gradually to ascend from the tribune, so that those portions of the hearers at the extreme eastern end of the structure will be enabled to see the minister. At the western end of the building is planned a library, with male and female candidates’ rooms, and in the basement there is a spacious schoolroom, four class- rooms, and a large lecture-hall, the latter of which will comprise an area larger than Mr. Spurgeon’s present chapel in Park-street.

As we are aware that several extremely exaggerated and erroneous statements have appeared in the press with reference to the number of persons that several public buildings recently erected will hold, we may give the correct data of the two largest, our present subject being of the greatest capacity for accommodation as to quantity, and, we believe, will hold more than double that of any structure specially set apart for religious worship.

Mr. W. Willmer Pocock is the architect for the new Tabernacle, and Mr. William Higgs, Palace-road, Lambeth, is the general contractor, who has carried out the works in the most creditable manner under the practical guidance of Mr. James Reed as clerk of works.”

From The Building News, September 1 1899: “The rebuilding of this large chapel after the late fire is now in progress, and we illustrate the plans and section of the work. The original front substantially remains as before. To obviate the great inconvenience to the congregation of being deprived of their building, the architects, Nessrs. Searle and Hayes, of Ludgate-hill.E.C, suggested the idea of covering in the basement story, and finishing it so that it might be used for services. This has now been completed ; the basement floor was lowered, new approaches formed, giving ample and convenient access, the roof being of iron and concrete, covered with asphalte, upon which the wood-block floor of the Tabernacle will be laid. By this means a lofty, well-lighted hall has been obtained, capable of seating some 1,800 people. The works were carried out by Messrs. Higgs and Hill, Ltd.. at a cost of about £7,000. In reconstructing the superstructure, the contract for which is now in hand, the architects have been desired to adhere as closely as possible to the form and detail of the original building, which was designed by Sir. W. Willmer Pocock.”