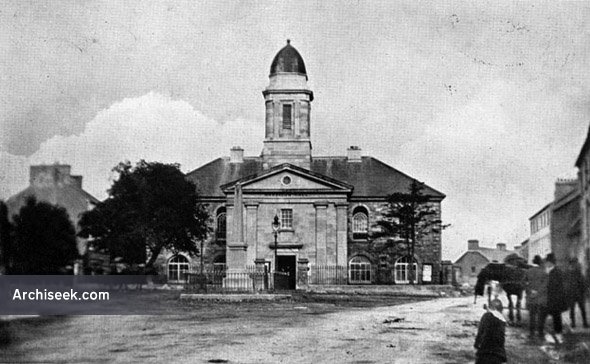 Now a branch of the d Bank of Ireland but known also as Harrison Hall. Originally built as a rectangular-plan court house and market house in the mid-eighteenth century, this building, having become derelict, was bought by the Parish Priest Fr John Madden in 1829, at the time of Roman Catholic Emancipation. Converted into a Roman Catholic Church, the front and rear additions were erected in 1844. After 1903 it became a recreational hall to commemorate Dr John Harrison (who was a physician in Roscommon town’s workhouse, during the famine of the 1840s) it was used as a dance hall, cinema and theatre before it was sold to the Bank of Ireland in 1972.